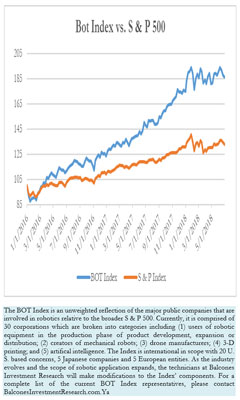 While the Bot Index well outperformed the return of the S & P 500 for the week, both were still in negative territory. The broad market declined 1.32% while the robotic issues fell a bit over three-quarters of a percentage point. Of the gainers, AeroVironment led the index with a whopping 20.21% increase. The company reported sales and earnings that exceeded expectations. Investors had been anticipating $.54 for its fourth quarter earnings and the actuals turned a $.77 profit. As an aside, the company announced it was selling its energy systems subsidiary and will concentrate on its drone business. Following AeroVironment was the low-priced Ekso Bionics that gained 5.92% on only a ten-cent increase. After three consecutive weeks of residing upon the largest losers’ list, Hiwin Technologies recovered 5.88% to end the second quarter. Its shares had fallen from $504 to $340 in recent weeks. The stock of Oceaneering International rose 3.33% on the continuing strength of oil prices. And the final gainer was Accuray Inc. who bounced 2.5% following its disastrous decline of over 8% in the prior week.

In the losers’ column, Rewalk Robotics fell 6.67% as it continues to face a tirade of class action lawsuits. The analysts at Balcones Investment Research will be seeking a suitable replacement as Rewalk will be removed from the index due to its extremely low-priced valuation. Robotics bellwether NVIDIA Corp. turned in the second worst performance, falling over five and a half percent. Many of NVIDIA’s peers in the semiconductor business also suffered market retractions as fears of Chinese trade retaliation came to the forefront. The Japanese firms Yaskawa Electric Corp. and OMRON Corp. each fell over 4% while Google, ABB Ltd., Mazor Robotics and 3D Systems experienced 3+% drops.

At the end of the first six months of 2018, the Bot Index gained a respectable 6.35% while the broader market increased only 1.60%. The five best performers within the robotics sector included Immersion Corp., 3D Systems, Amazon, Intuitive Surgical and AeroVironment. The five worst for the period were Cyberdyne, OMRON, ABB Ltd., Fanuf and Ekso Bionics.

The big news in the world of robotics this week has to be the Space X launch of its first AI robot heading to the International Space Station. The basketball shaped eleven-pound research assistant will help astronauts perform scientific experiments. The Artificial Intelligence is provided by IBM and will be maintained through IBM’s Cloud.

The U.S. grocery chain Kroger announced a partnership with Nuro, a Google-based autonomous vehicle firm, to deliver groceries. While the vehicles will use technology that is carried on most of the autonomous passenger transport automobiles, the size and specifications of the Nuro vehicle are specifically designed to carry perishable cargo. The partnership will commence this fall but there has been no timetable on the inauguration of the deliveries.

The Bot Brief has frequently cited underseas and space exploration as particularly suited for robotic enterprises. In the past couple of weeks, the Trump Administration announced it would pursue a ‘space force’ initiative. As a new military branch, the space force focus has a very similar strategy to that of President Reagan’s Star Wars platform that helped topple the Soviet Union. While the proposal is vague in both intent and application, the fact that there is a governmental initiative that addresses new space exploitation will certainly involve robotic applications.