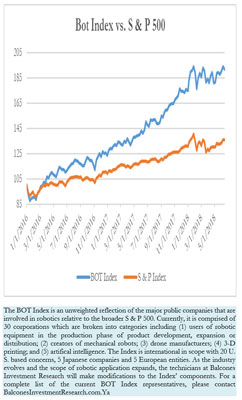 In the wake of the U.S. Administration’s announced tariffs against Chinese goods, the domestic market took a decidedly negative turn on Friday’s trading. The S & P 500 was virtually flat for the week; however, the higher beta bot names experienced a rather significant downturn. The Bot Index fell 1.10% as, once again, Asian stocks led the slide and energy companies worried about OPEC’s expected output increase.

The greatest weakness in the Bot Index was recorded by Hiwin Technologies whose stock fell 10.07%. The stock was also the prior week’s worst performer having fallen 5.80%. Two other Asian issues were among the weakest of the index’s constituents. Yaskawa Electric declined 4.51% and OMRON Corp. slid 5.74%. With the prospect of successful peace talks between the U.S. and North Korea, three defense-related bot names lost investor enthusiasm. Northrup Grumman declined 5.05% while Lockheed Martin fell 3.77%. Rounding out the losers for the week were Oceaneering International, down 6.67% (on those OPEC discussions) and Cognex’s 3.88% plunge.

Yikes! One Arm Bandits Now Have A Robotic Cousin.

The luxury cruise line Azamara has replaced many of its on-board gambling casino operations with the video equivalents of blackjack and roulette. Previously, the company had traditional dealers and croupiers that served those functions. In an interview with a cruise officer, the Bot Brief was told that Azamara had moved to the robotic replacements due to the demographics of their clientele. He explained that the new platform was less intimidating and allowed crewmembers to perform other service tasks rather than spending many hours idle or catering to a small number of customers. On Azamara’s parent company Royal Caribbean, which has different demographics, the decision has been to retain casino employment at this stage.

The company selected Bally as its casino hardware replacements. The Bally FusionAC was the vendor, a picture of the system in included: 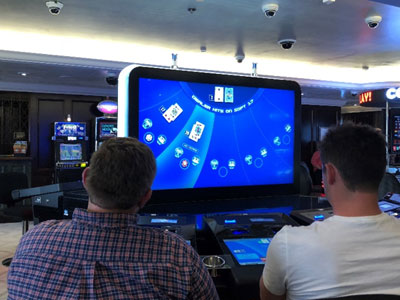