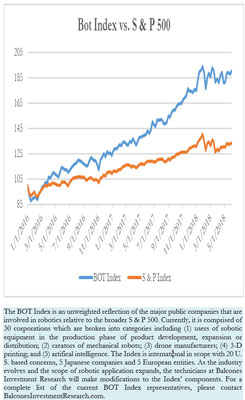 The Bot Index beat the S & P 500 by almost a full percentage point in last week’s activity. A number of robotic issues experienced significant expansion as earnings and new product introductions highlighted the sector. The best performer was Ekso Bionics whose price jumped from $1.50 to $1.70 as volume on Tuesday increased from 127.4 thousand shares on Monday to over 936 thousand on Tuesday. With no real news to account for the stock improvement, there has to have been a short covering or a position taken by a larger institutional investor. The only other double-digit producer for the week was Immersion Corp. whose stock rose 10.53%. Immersion has been on a sharp incline since the Apple verdict and its substantial quarterly earnings growth. The touch screen company has doubled in 2018 and the company recently raised guidance for 2018 revenues to exceed $108 million, prompting Wall Street analysts to anticipate EPS to rise from $1.34 to $2.03!

Other notable gainers included Intuitive Surgical who rose almost 5% on the news that the FDA has approved the da Vinci Single Port platform for use in conjunction with its X and XI surgical systems. Google gained 4.08%, 3 D Systems rose 3.58% and Nvidia Corp. provided shareholders with a 3.35% profit. The Motley Fool produced an article entitled, “Wall Street Has Given Up on These 3 Stocks and That is a Huge Mistake” that cited Oceaneering International which was the likely catalyst for the stock’s 3.32% run-up. Teledyne was awarded the 2nd phase of a $42 million contract regarding the European Space Agency’s project PLATO. PLATO is a spacecraft specifically designed to identify and visually report on the potential for life sustaining planets in a variety of alternative solar systems. Shares of TDY benefited to the tune of 3.35% on the contract announcement.

During the period the only stocks that really experience much downside were all Japanese dominion concerns. Perhaps reflecting the 279-point drop in Nikkei during the week, Cybedyne Inc. led the weakness with a 4.18% retreat, while Fanuf Corp., Omron and Yaskawa Electric declined 3.38%, 2.66% and 2.56% respectively.

The Bot Brief had an opportunity to discuss the domestic economy and implications regarding automation with Chicago economist Mike Lewis. Mr. Lewis is an MIT grad with his masters from UCLA and has been the president of the econometric firm Free Market Inc. since founding the company in the early 1980’s. In the cusp of Friday’s report of a 230,000-job expansion report, with unemployment falling to 3.8%, and average hourly earnings gaining .3%, we posed the question about robotics and employment. According to Mr. Lewis as have many economists have noted, historic economic revolutions have generally been accretive to employment and a significant positive step forward for all mankind. The robotic and automation revolution will invariably follow the historic norms.

We discussed the likely impact of automation on future productivity. While the adage of the combination of the labor force growth rate and productivity are pretty good indicators of potential growth of GDP, there has certainly been a lag in the impact of automation on productivity. Lewis expects that businesses have yet to fully endorse and develop the capital spending plans on robotics and automation that will start to have productivity implications. Non-farm productivity rose .7% in Q1 2018 up  from .3% in Q4 2017 yet that is still well below the 3 ½% gains that have been noted following the past three recessions. However, the key to productivity is capital spending and here is what Mr. Lewis explained in a recent piece on the effects of the corporate tax cuts, “All the corporate tax cuts were effective on January 1 (the 100% write-off of investment instead of 5-year depreciation was back-dated to September 30, 2017). However, it will take time for firms to adapt their plans to the new, lower rates. Firms spend years planning new facilities, acquisitions and market expansions. Hiring people to staff those facilities et al also takes years. Marco Rubio notwithstanding, no reasonable person could expect corporations to turn tax savings into new investment overnight or even within a few quarters.

Critics have faulted corporations for using their tax cut “windfall” for higher dividends or stock buybacks. But in the absence of immediate capital investment plans/opportunities, this is a better use than retaining cash. Dividends and buybacks are putting cash into the hands of investors who, presumably, will invest in companies that are ready to expand. In any case, stock buybacks are hardly ever permanent: firms buy their own stock now, then issue new shares later when they have a need for more capital. Or they use the higher-valued shares to expand via mergers and acquisitions.

Eventually, this corporate investment must lead to higher labor income. More employees will be hired; with better equipment, workers will be more productive and will be paid accordingly. In early 2018, hundreds of firms did rush out billions of dollars in bonuses to reward (and help retain) employees. Firms’ overall compensation strategies, renegotiating union and other contracts et al will take some more time.

Still, IRS data does suggest that personal income is picking up noticeably. For FY2018 to date, October through April, individual tax revenue has risen a very impressive +11% vs. the same period a year ago. That reflects withholding plus quarterly or other tax payments. This is in spite of the lower tax rates that began in January. Not surprisingly, corporate tax collections have fallen -24% so far in the current fiscal year.

THE TRUTH MAY NOT BE OUT THERE:

Finally, FMI would note that even after the economy feels the full benefits of the tax cuts, it may take time for the data to catch up. For all its presumed precision, GDP is predicated on surveys and trends that extrapolate from limited “hard” data. For example, we get complete income results, only with a two-year lag as the IRS tallies all returns. A major tax reform, especially the far-reaching changes here for corporate and subchapter S firms, may have some effects on the underlying patterns of activity. It may take an annual GDP benchmark or two, with progressively more complete data, to get a full picture.

In any case, the tax cut is worth at best a few tenths of a percent of GDP growth. It will be blended with the myriad of other factors influencing the economy. Thus, we will never know the exact “truth” about the macro benefits of the tax cuts. Nonetheless, FMI is confident that it will indeed be a modest positive and that the positive will take place in the next two-three years.”

Eventually, the trickle down of tax cuts, spending plans and the impact of automation to productivity will be felt. Prices can be contained, employment will be expanded, there will be more consistency of product improvement, and the population will enjoy an enhanced and safer lifestyle. Surely, the age of the Robotic Revolution will deliver a new era of prosperity.