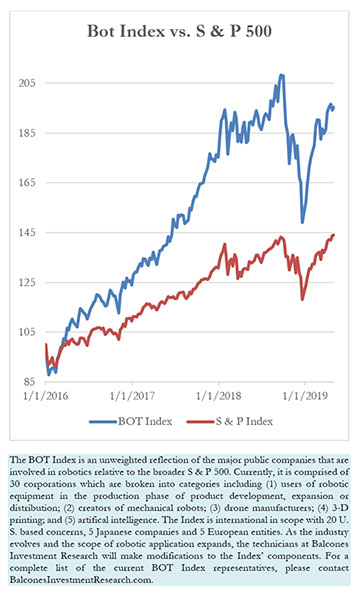 The Bot Index barely eked out a .6% gain while the S & P 500 rose a mere .2% for the final week of April. The effects of earnings season once again dominated the cause of the major winners and losers within the index. The gainers were led by Oceaneering International whose surprise 11.08% jump was a result of its improving revenue and earnings picture. For the first quarter, EPS came in at a negative 24 cents versus last year’s decline of 41 cents. Analysts had been anticipating a forty-five-cent loss. However, it was the revenue picture that most excited investors. The quarter came in with sales of $493.8 million which exceeded estimates of $466 million, above the year over year comparison of $416.4 million and 19% above the fourth quarter of 2018.

Apple’s earnings were announced during the week and certainly contributed to the stock’s 3.65% gain. Analysts and shareholders were pleased with the $2.46 per share earnings which were above the $2.37 expectations, though below last year’s $2.73. The stock has been steadily climbing through the first quarter bringing Bot Index’s iPhone price to stock price ratio to 6.34, well down from this year-end’s 9.29 level.

iRobot shares rebounded from last week’s 22% debacle with a solid 4.84% recovery. The stock was aided by a Zachs’ article entitled, “Top Ranked Growth Stocks to Buy For April 30” which included iRobot Corp. Immersion Technologies gained 4% in anticipation of its May 7th earnings release. The Street is looking at a loss of 27 cents which is incomparable to last year’s earnings comparison which included the Apple lawsuit settlement. It has been noted that the company has exceeded expectations three of the last four quarters.

Earnings dominated the two companies that disappointed investors last week. Cognex Corp. declined 10+% when its quarter net income was reported down 11% from $37.2 million in 2018 to $33.1 million.  Year over year revenues were up only 2% and the quarter over quarter sales were down 10%. Quarter over quarter net income fell 27% and per share earnings off 35%. The weakness was attributed to the China tariff issues and lower than expected automobile sales in the United States. Another concern for investors was the fact that research and development expenditures fell in both the quarter and year comparisons. Google was the second company whose stock showed weakness to the tune of 6.82% due to revenues that were about one billion dollars less that expected. Stifel Nicholas downgraded the stock.

Productivity, the Rodney Dangerfield’s “I Don’t Get No Respect” of the Economic World:

This week’s reported jump in non-farm productivity of a massive 3.6% was met with a big ‘ho-hum’ by the markets.  The gain was the most significant in four years and well above Street expectations of 2.2%. Economists have been confused by the low rates of production growth which have averaged only 1.3% from 2007 to 2018. Manufacturing productivity has had an even weaker record with a seven tenths average annual increase.

The economic significance of productivity is two-fold: Promoting GDP expansion while containing inflation. Of the two primary components of economic activity: Labor force growth together with productivity expansion, productivity is the least predictable. The Bot Brief feels this report could be the tipping point where the imposition of robotics into the work force has a positive impact upon economic growth. According to the Bureau of Labor Statistics the projected growth in the U.S. labor force is expected to drop to only 0.6% annually from 2016 to 2026. With one of the two real components of economic activity at such low levels, the need for increasing productivity will be critical for domestic economic growth. Hopefully, this quarter’s report is a forebearer of just how impactful robotic automation will be on our economy.

Stepping Into the Future With Old World Stone