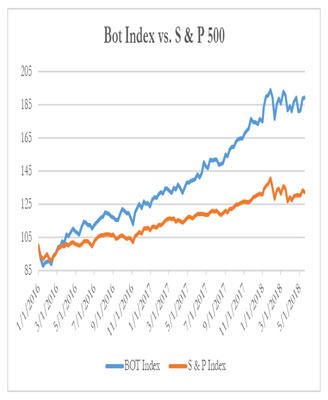 Robotic stocks performed relatively well last week as they bested the market by about three quarters of one percent. Once again, the Bot Index was led by shares of Immersion Corp. who increased by just under 8%. The stock has more than doubled since mid-December and this week’s boost was a result of a favorable report by Zachs Investment Research. Mazor Robotics was next on the pop list with its 6.31% improvement. Mazor reported its first quarter earnings and investors were pleased with the 32% jump in revenues and the 160% increase in non-U.S. sales. Earnings per share jumped from a loss of 8 cents in the prior year’s quarter versus only 1 cent in the red for 2018. 3D Systems was subject to a positive article by InvestorPlace that noted the 3D printing business was a beneficiary of defense spending and a separate press release regarding one of the  company’s clients successful use of 3D’s dental implant production. Accuray Inc. gained 5.25% on a press release regarding the company’s progress on cancer treatment communication but is likely to be hit on Monday’s trading due to Zachs’ placement of the company on it ‘strong sell’ rating. Finally in the contributors to the Bot Index’s performance this week, was Oceaneering International who has benefitted by the sharp run-up in oil prices following the political developments between Iran and the U.S.

There were only two decliners in the Bot Index of any particular note: AeroVironment who fell 6.30% and Cognex who was off 6.06%. AeroVironment’s fall was due to a report that the company had allegedly tried to cover up a 2015 incident whereby AeroVironment employees had carried a live explosive device within a drone on a U.S. air carrier. A whistle blower suit has been filed and subsequently a securities litigation firm contends that an SEC fraud had been committed. Cognex’s decline was a sell signal from Zachs and Wall Street analysts’ downward revision to this quarter’s earnings outlook.

Time to Take a Vacation?

There is an old market adage, “Sell in May and Go Away.” In looking at the Bot Index chart, the advice could have centered on a February liquidation instead. Since the end of January, the Index’s steadily upward pattern has been disrupted and replaced with a choppy sideways configuration.

In an environment such as this, it might be interesting to employ an investment strategy such as the Bot Brief has indicated as prudent in the past. The simultaneous use of both put and call writing techniques can be useful in generating cash flow and purchasing potential portfolio holdings below current market prices. An example of this strategy might be regarding the shares of IRobot. Currently trading at $62.43, an investor who would like to own the company can either buy it at that price or buy a half position and write a September $67.50 call on those shares and write a same term put at $57.50 on the remaining shares. For those options, the investor would accrue $3.80 from the call and $3.50 from the put obligations. By the September expiration three things could have happened. The stock could go down, the stock could stay the same or it could go up. In each case, the use of option strategies provides the investor with knowledge of the impact of each particular market outcome. If the stock goes down below the exercise strike of the put, the investor will own the new shares at a price that is essentially 19.2% below the current price. Due to the two premiums, the cost of new shares is essentially $50.20. If the stock stays the same, the investor gains 11.70% due to the accrual of the $7.30 in premiums. If the stock goes up and the original stock is called at $67.50, the return is 19.80%. As these statistics are known before the strategy is employed, the investor can determine if the approach is suitable for their risk/reward appetite.

The table below depicts this strategy for several of the components of the Bot Index. The prices are bid as of Friday, May 18.