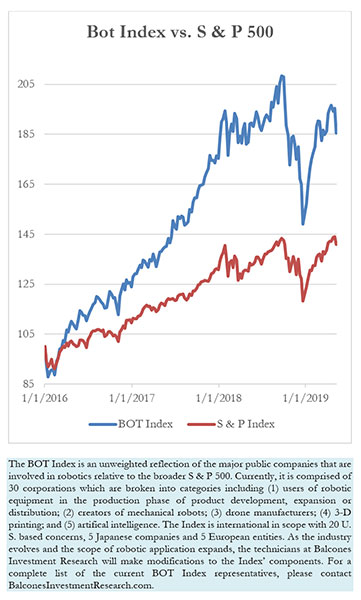 The Bot Index was impacted by two macro events during the past week. The increased international tensions between the U.S. and North Korea and Iran together with the growing conflict between Hamas and Israel served to boost several of the defense related companies within the Bot Index. However, the China tariff issue was exacerbated by the imposition of new sanctions and a cessation of constructive dialog between China and the U.S. This served to negatively impact most of the Asian components and created investor uncertainty on supply chain production of companies such as Apple and iRobot. Consequently, the index declined 5.06% versus the S & P 500’s 2.18% fall.

The leading component for the week was Immersion Corp. whose 8.79% performance followed the prior week’s 4% gain. This was despite the company’s postponing of its quarterly earnings release from May 6th to May 13. Interestingly, the stock rose a dollar on volume that jumped from 159,400 to 857,800 on the day of the announced postponement.

Certainly, the U.S. confiscation of the North Korean boat Wise Honest (ironic moniker for a ship that was violating coal export sanctions) contributed to investor interest in defense stocks. Add the announcement on May 8th of broad new sanctions on Iranian iron, steel, aluminum and copper exports together with the Hamas missile attacks on Israel the shares of Lockheed Martin (+2.18%) and Northrup Grumman (+2.99%) were among the only three positive performers for the week. Both stocks jumped significantly in trading Thursday and Friday on strong volume.

The breakdown of constructive trade talks by the U.S. and China contributed to the 9.16% decline by NIO Corp. and the near 11% fall by Hiwin Technologies. All the Asian names within the portfolio were negatively impacted and iRobot’s 9.61% drop was attributed to concerns that supply chain disruptions from Chinese production could further impact revenues in the second quarter.

Ekso Bionics and 3D Systems both experienced double-digit retracements due to poor March quarter earnings. Ekso reported a loss of $.10 versus an expected loss of 8 cents. Revenues of $3.62 million were 9% below analysts’ projections but above year over year quarter sales of $2.52 million and per share earnings, while below Wall Street projections, were an improvement over the $.14 loss over the comparable period of 2018. A 21.88% stock plunge accompanied 3D System’s 8% revenue decline and 9 cent loss in Wednesday’s earnings report. The Street had been looking for a loss of a penny which would have represented a year over year improvement from the 3 cent loss in 2018.

Bot Health: It’s in the Veins:

The 1966 movie picture entitled Fantastic Voyage depicted a microscopic submarine that was injected into the blood stream of a dying scientist in order to patch up wounds. Well now a consortium of academicians from Cornell and the University of Pennsylvania have developed microbots the size of a cell that utilize a shell of platinum and titanium which, when electrified, expand and contract allowing the silicon miniwafer to ‘crawl’. While the uses within the human body could be an alternative to some surgeries the miniaturization of mobile robots could have thousands of practical uses. While still in its infancy stage, the promise of nanotechnology within in the realm of robotics simply provides further evidence of how robots can benefit mankind.

Also, this week a robotic healthcare company Corindus Vascular Robotics (CVRS) made news when it posted earnings. The stock soared some 42% from its close on Tuesday on a revenue double and gross profit which increased 50%. The $616 million market cap company whose precision vascular robots are utilized in Percutaneous Coronary Intervention procedures has noted that its low-priced stock has gained 158% thus far this year.