There is no force on earth more powerful than an idea whose time has come."   -Victor Hugo 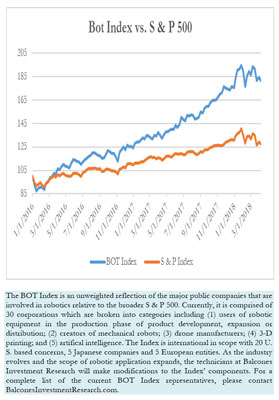 The wild volatility in last week’s market trading was equally experienced by the performance of the Bot Index components. Only three companies produced adequate returns and they were all Asian-based companies. The Taiwanese company - Hiwin Technologies Corp. led the pack with a strong 8.6% performance and was followed by Yaskawa Electric’s 7.88% and CYBERDYNE’s 7.18% increase. In the loser column, while there were no double-digit decliners, the group included eleven of the thirty components that experienced bad to terrible results for the week. With growing doubts about the recent issues with self-driving autos, two names in that industry were among the worst performers. NVIDIA Corp. and Cognex each declined 7.49% and 5.19% respectively. Other weakness occurred with the shares of ABB Limited Corp. (-5.98%), Immersion Corp. (-4.35%), Rockwell Automation (-3.01%), Intuitive Surgical (-3.94%), Accuray Inc. (-6%), Mazor Robotics (-5.18%), and Ekso Bionics Holdings (-7.59%). The leading loss was experienced by Keyence Corp. whose 9.02% drop highlighted a rather middling performance since reaching $618 on November 24 of 2017. The stock closed the week at $569.49.

Hemingway’s To Have and Have Not would be a great moniker for the performance of Bot Index Stocks in Q1 20018!

Perhaps, instead, the quarter’s moniker could have been characterized by Charles Dicken’s leading lines from A Tale of Two Cities. For some of the Bot Index’s companies it was the ‘best of times’, for some it was ‘the worst of times’. The table below notes the variance in (as Sergio Leone directed) “The Good, the Bad and the Ugly”.

Automated sorting of parcels in motion

Automated assembling of spikes on shoes