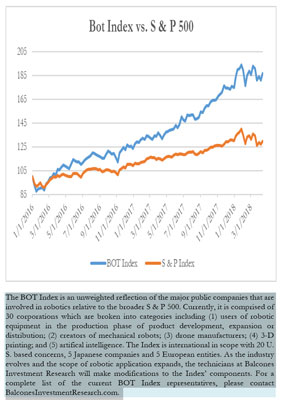 Significant strength was noted by robotic corporations in this week’s trading. The Bot Index rose 3.17% to 187.1185 while the S & P 500 gained almost 2%. Many of the leading performers this week were among the weakest issues in the prior week. Leading the pack of stocks that exceeded 5%, was Ekso Bionics whose 14.38% jump contrasted with the 7.59% decline of the April 6 period. Other gainers that recovered from weakness included Nvidia who gained 8.05%, Mazor Robotics added 6.43% and 3D Systems that jumped 6.13%. Faro Technologies increased 5.83% and Oceaneering International rose 10.12%. The notable exception in contrasting performance statistics was Hiwin Technologies whose 11.48% gain followed the previous week’s 8.6% improvement. Since last August, the company’s stock has more than doubled. By contrast, the Bot Index rose 23.2% and the S & P 500 gained 7.25% over this same period. The Index’s best performer for the week was AeroVironment, Inc. that jumped  24.76% on news of an upgrade by Stifel Nicolaus to a ‘buy’ recommendation.

Consistent with the divergent weekly performance of some of the gainers, the heavy losers this week included the better performers from last week. All of the significant declines were experienced by Japanese companies. Yaskawa Electric fell 10.60% following its 7.88% improvement in the prior week. The same yoyo effect was experienced by Cyberdyne whose 9.18% slide contrasted with its gain of 7.18% last week. OMRON Corp. dropped 5.35% in value and Fanuc Corp. rounded out the losers with its 2.43% retracement.

By interesting coincidence with the Syrian affairs over the weekend, The Wall Street Journal ran a mid-week article entitled Meet the New Robot Army. The sagacious piece centered on how widespread is the application of war-bots and the number of countries that have non-human combatants in their respective arsenals. The article noted that sixteen countries already utilize drones within their defensive framework. In fact, the primary ordinance used against Syrian chemical plants was the Raytheon Tomahawk Cruise Missile launched from sea-based destroyers and submarines. It is certain that the face of future international conflict will host a variety of robotic alternatives to human combatants.

The Bot Index’s list of this week’s best performers was led by the remarkable jump in the shares of AeroVironment, Inc. We noted that Stifel had increased its stock rating, however, we didn’t mention the impetus of the upgrade. AeroVironment is a leading drone manufacturer and, just recently, developed a relationship with the U.S. Navy. The Navy is keenly interested in using AeroVironment’s Switchblade attack drone in conjunction with its already employed Puma surveillance drone. The Switchblade is a combination of a drone with visual operation from remote and an ordinance tipped missile. Recently, the company successfully tested the ability to coordinate the attack features of Switchblade with the surveillance ability of the all-weather Puma. The Navy has been particularly concerned with rapid attacks by clusters of smaller craft for which the Switchblade/Puma synergy is designed.