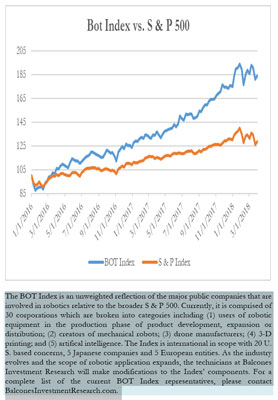 The Bot Index popped 1.48% during the abbreviated week of Easter trading. In a divergence from the traditional returns in a positive market, the Bots underperformed the general market as defined by the S & P 500, who gained a bit over two percent. Nonetheless, the Bot Index recorded eight stocks that experienced greater than 3% market gains. Six of the best returners were non-U.S. companies and were led by the 7.75% advance by the Taiwan-based Hiwin Technologies Corp. Three Japanese companies, Keyence, Fanuc Corp. and OMRON Corp. produced returns of 5.74%, 5.04% and 4.59% respectively. Textron and Intuitive Surgical rose 3.57% and 3.43%. The Swiss firm ABB Ltd. gained 3.08% and Mazor Robotics bounced back 3.13% from the 13.35% cratering of the previous week.

There were only three stocks with significant losses during the week. Oceaneering International fell 4.09% and IRobot slid 3.79%. With the White House chastising Amazon on postal delivery charges and threatening possible anti-trust actions, the stock of Amazon declined 3.22% for the week, despite a near $16 dollar increase on Thursday’s closing trade.

For Productivity, Try a DAQRI:

In the past few months various U.S. economic growth projections for 2018 have been published by the Fed, the CBO, RSM, and Wall Street. All seem to point to a 2 ½% to 2 ¾% level that is virtually like the 2017 experience. In many cases the expectations for future growth past 2018 are at levels below that of this year’s expected performance. With the increase in the labor participation rate, the tax cut and the 9% jump in business equipment spending during 2017, we have to wonder why such low projections of economic activity. In a recent McKinsey report, the company noted the sharp decline in productivity since 2004 as the likely culprit for weak numbers. Certainly, the potential for intrinsic economic growth is a combination of the labor supply and productivity. It is evident that demographics cannot be changed to impact the labor force so, in order to enhance economic growth, leaps in productivity must be present to augment the labor supply. It is, therefore, evident that the efficiencies that robots, artificial intelligence and augmented reality provide will be of enormous benefit to future economic activity.

The company gained its start with the objective to overlay 3D holographic work with digital applications. Its first effort came in 2010 when it built applications for mobile phones. Shortly after that introduction, the company created a wearable helmet that found its way into the hands of 150 customers to apply augmented reality within business and building processes. The worth of the process was documented in a Siemens Co. test of gas turbine assembly whereby wearers of the DAQRI Smart Helmet were able to cut production time from 480 minutes to 45 minutes. In another application regarding wind turbine inspection, AR DAQRI Smart Helmets reduced time by 44% and with a 33% greater accuracy.

Following the success of the DAQRI Smart Helmet, the company introduced DAQRI Smart Glasses in November of 2017 that could be applied to any ‘high value’ assets that have complex tasks across a variety of industry applications. When dealing with the development of major projects or maintenance of expensive medical equipment, DAQRI’s Smart Glasses allow collaboration and investigatory solutions.

Recently, the company introduced its DAQRI Worksense Suite of AR applications as a response to customer reaction to DAQRI Smart Glasses and the AR helmet. This combination of apps includes:

Tag: The tag aspect allows the smart glass wearer to define points in space or ‘tag’ a piece of equipment and then assign a variety of digital data types that could assist in future maintenance or problem solving.

Model: This product enables the viewing of 3D models from remote CAD-CAM systems to integrate with AR software. Model capabilities were highlighted in the company’s website regarding the construction of a hospital from design that was integrated with a 3D model of the configuration of the various air ducts, ventilation shafts, electrical wiring, pneumatic systems and fluid controls. The wearer of the glasses could see in the third dimension all the configurations of the internal systems on site that would help in reducing errors in the construction phase

Scan: Worksense’s Scan option is used to ‘scan’ or map equipment or the environment to create sharable 3D digital models. It is designed to assist with repairs, maintenance and retrofits.

Guide: As an enhancement to productivity the company introduced within the Worksense Suite, an application that would review the various steps in any production process that would permit the greatest level of efficiency.

In a single phrase, the company might be characterized as producing products and software that, ‘enhance vision sense and document the human visual memory.’ All of which will add significantly to industrial productivity, safety and maintenance. As more of the products of companies such as DAQRI become mainstream in the production cycle, the greater the level of productivity that will accrue to our economy. With greater productivity will come a jump in GDP that will serve as a benefit to all.

As a sideline, the Bot Brief asked Mr. Haggar from where the name for DAQRI came. His response was a bit vague but indicated that he had heard that the founder of the company, Brian Mullens, had written an algorithm that would create a name with the parameters that it would consist of five letters, two vowels and had an available domain. Hence, the name DAQRI was established… and you thought it was a misspelling of the popular cocktail!