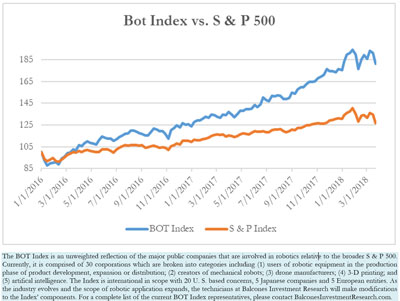 Markets worldwide were impacted by the Chinese response to U.S. imposition of steel and aluminum tariffs. Fears of the financial impact to certain companies and the prospect of rising inflation, in general, drove markets downward throughout the week. The broad average S & P 500 tumbled almost 6% and, with a decline of 5.07%, the Bot Index recorded its worst performing week since its inception in 2015. In the chart below, the S & P 500 is now under the point at which it began the year and the Bots are only slightly to the positive.

There were only four gainers for the week within the thirty-stock index. Two of those were the aerospace defense companies Lockheed Martin (+1.48%) and Northrup Grumman (+2.14%) while Oceaneering International and Hiwin Technologies Corp. eked 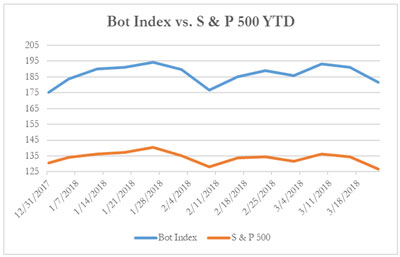 out fractionally positive returns. Lockheed and Northrup both gained as a result of the passage of the U.S. spending bill that included an increased capital flow to the Pentagon.

Four companies experienced double digit or near declines included many of the high (or infinite) P/E stocks. The worst two, Mazor Robotics and Google, have been among the best of the Bot Index performers over the past year. They both fell over 10% in the week while Intuitive Surgical, Accuray Inc. and Yaskawa Electric each slipped greater than 8%.

Two weeks ago, the Bot Brief reported on the progress of automotive transportation. Since that publication, Uber’s autonomous vehicle hit and killed a pedestrian. While the facts are yet unclear as to the cause of the accident since the pedestrian was not in a crosswalk, the backlash of such an event creates confusion as to the overall safety of self-driving automobiles. While this is certainly a setback, this incident is unlikely to halt the development process. An executive from Mobileye recently suggested that the systems employed by AV’s, while not infallible, would reduce highway deaths from 40,000 each year to 40. It is true that AV’s would not respond to emails and texts, would not imbibe in alcohol nor run the risk of falling asleep. Public perceptions, however, sometime ignore facts and are the prey of misconceptions and fear. One must wonder, however, if Uber’s order to purchase 24,000 Volvo autonomous vehicles will be postponed.

During the week more automotive news came from China. A China-based company, Polymaker Co. and an Italian manufacturer, X Electric Vehicle, unveiled a prototype of a small car that was made almost entirely from a 3-D printer. Dubbed the LSEV, the electric two-seater took just 3 days to produce and the joint venture predicts it will go into full production next year. Priced at approximately $10,000, the car weighs in at 450 kg, has a range of 93 miles before needing to be recharged and has a top speed of 45 mph.

In the March 10th issue of The Economist’s Sing a Song of Sonar’, the publication predicted that under-water drones would vastly increase the knowledge of the seas. “By removing the expense of keeping humans alive on or under the sea, these technologies vastly expand the volume of the ocean which can be monitored and measured, whether it be for fishery management or weather prediction.” Last year the Bot Brief reported on the Japan Agency for Marine-Earth Science and Technology (JAMSTEC) and its quest to use underwater drones for the mining of manganese nodules in the Japanese Exclusive Economic Zone. As reported in The Economist article, the International Seabed Authority is opening up the Clarion Clipperton Zone (CCZ) in the Pacific ocean for mining of a variety of elemental nodules. “This could be big business. James Hein of the U. S. Geological survey and colleagues estimated in a paper in 2012 that the CCZ holds more nickel, cobalt and manganese than all known terrestrial deposits of those metals put together. The World Bank expects the battery industry’s demand for these and other minerals to increase if the transition to clean energy speeds up enough to keep global temperatures below the limits set in the Paris agreement on climate.” A new underwater drone produced by a company in Belgium has been designed to mine these nodules at a rate of several tons per minute. Other concerns are seeking to mine gold and copper in Papua New Guinea, zinc and gold in the Red Sea and De Beers is currently mining ‘a significant proportion’ of its diamonds from offshore Namibia.