The bots experienced a wide divergence of performance during the past week. In something of a ‘barbell’ distribution, the bots gained 2.34% versus the S & P’s 2.89%. There were nine Bot Index components whose weekly gains exceeded five percent and three that were down well over that 5% target. The top performer was Ekso Bionics whose 16.41% jump helped the stock to rise almost 90% since the beginning of 2019. NVIDIA and Oceaneering International joined Ekso in the double-digit gaining category.  NVIDIA was subject of an article entitled “The 5 Best Stocks to Invest in Self-Driving Cars” by InvestorPlace and, due in part to improving earnings, Oceaneering International’s rating by Jefferies was increased to ‘hold to buy’. The stocks were up 12.73% and 12.37% respectively. Other notable gainers included Cyberdyne Inc. up 9.80%, Yaskawa Electric up 9.27%, Apple and Faro each increased 7.65% while Amazon and Cognex rose a touch over 5 and one-half percent.

Of the losers, the Chinese electric car company NIO Inc. collapsed another 19.12%. Since a strong run that was prefaced by a 60 Minutes interview, the stock has returned to a new low for the year. AeroVironment fell 9.72% despite a favorable comment by Jim Cramer in his CNBC Lightening Round and Accuray Inc. declined 6.50%.

The Bot Brief  once again traveled to Houston to attend the 2019 HLSR Ag Robotics Challenge, a one-day event in the massive NRG Arena’s Exhibit Hall. Mr. Toby Lepley, the Superintendent of the Games explained the purpose and scope of this, the third annual robotics educational challenge, entitled “Around the Farm”. The Houston Livestock Show and Rodeo is the world’s largest such event (2.4 million visitors in 2018) whose mission is to provide scholarships and grants for the education of youth about agriculture or pioneer heritage. Since its founding in 1932, the event has generated over $443 million in the pursuit of education. The Ag Robotics Challenge is a new endeavor of the Rodeo and yet is rapidly growing and providing diversification of interest outside the traditional western culture.

Mr. Lepley noted that interest in the robotic competition has stimulated students from throughout the entire state to team up and face the eight challenges of the contest. While last year saw 42 teams at the event, this year there were over 50 groups that were provided with Lego Mindstorm kits to build robots that would be specifically designed to accomplish basic farm tasks. The event attracted over 300 students aged 10 to 18 to participate in the contest. The eight pre-known efforts included providing a healthy meal, pulling weeks, sorting strawberries, spraying the orchard, planting seeds, ultrasonic farming, hauling hay, feeding animals in the field. The contestants were to operate their robots on a playing field measuring 93” by 45”. While Mr. Lepley explained that these eight tasks would be explained to the teams in advance, there would be 2 ‘surprise’ efforts which would test the team’s resourcefulness and ability to solve known and unexpected problems. 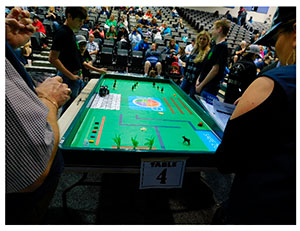 Playing field of the eight tasks 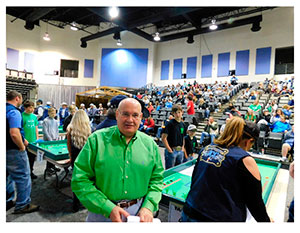 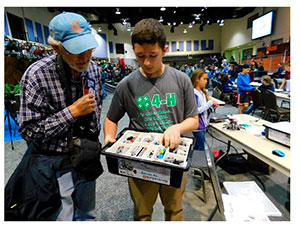 High Schooler explaining the basic equipment required to create the appropriate robot to meet the tasks. 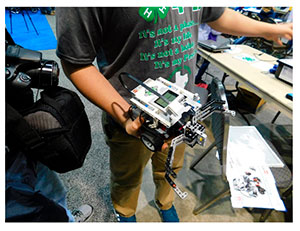 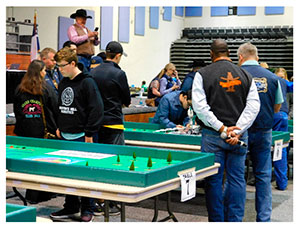 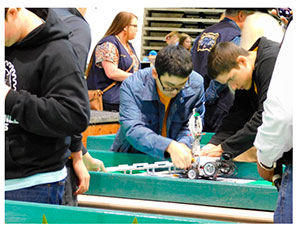 It is events such as these and the international FIRST Challenge that will provide the education, the stimulus and the guidance that will fill the employment that will feed the robotic revolution. Math, science, engineering and technology are the keys for the future society of mankind and expansion of robotics. As was explained by Mr. Lepley the number of U.S. farmers has declined dramatically during the past decades while the average age of farmers has jumped to 58.3 years from 50 years in just the past thirty years. It will take significant advances in production and automation to help feed our growing population.