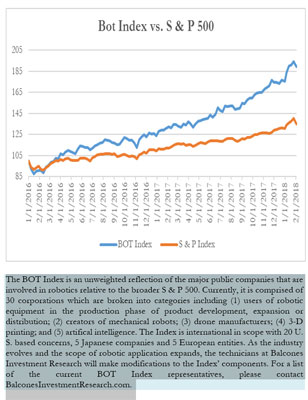 Thus far, February has not been kind to investors in the broad market and those involved in robotics investments. The S & P 500 collapsed on Friday, bringing the week’s performance to a negative 3.86%. Robotics stocks within the Bot Index faired a bit better, declining 2.45% and actually included several significant gainers. The most significant return for the week was recorded by Immersion Corp. whose price soared 36.92%! Immersion’s increase was as a result of the settlement of a long-standing lawsuit by Immersion alleging patent infringement by Apple regarding a variety of key Apple products. Details of the settlement are private; however, Immersion is expected to report earnings on February 22nd and the financial results of the settlement may start to show.

Other gainers for the week included ReWalk Robotics who rose 4.55% after it was reported that the German National Health Insurance Agency included a ReWalk exoskeleton device within its scope of financial coverage. Accuray Inc. rose 4.42%, primarily as a result of a Zacks Equity Research article that was entitled ‘4 Reasons Why You Should Buy Accuray Stock Right Now.’ Mazor Robotics was mentioned in a MarketWatch article suggesting that the stock could reach $80 per share in the next several weeks (stock is currently at $64.72!). Consequently, the shares were bid up 2.99% for the week. Finally, Lockheed Martin jumped 2.25% as the company was the subject of several positive articles, including the award of an $89 million contract and a report by the Motley Fool that the company was predicting a significant increase in 2018 earnings guidance.

Education is the Key!

The Bot Brief has always adhered to the logic that is represented by the Victor Hugo quote: “There is no force on earth as powerful as an idea whose time has come.” Certainly, the ‘idea’ of robotics is a force that is gaining traction in our macro and micro economy. The robotic revolution will, likewise, impose its consequences upon societal behavior, taxes and governmental policies. To be best prepared for the implications of, and opportunities provided by, this ‘idea’ whose time has come, education will be essential. In that regard, there are a number of participation events that are designed to encourage youth across the globe to develop a greater understanding of this new electro-mechanical age. The FIRST Robotics Competition is an international event that challenges and inspires students to learn and create robots to achieve certain tasks. The goal is to advance STEM interest while developing camaraderie and initiative. The following is a direct excerpt from a FIRST video:

With this inspirational passage, the Bot Brief concludes with another quote from Victor Hugo who wrote, “Teach the ignorant as much as you can: Society is culpable in not providing a free education for all and it must answer for the night which it produces. If the soul is left in darkness, sins will be committed. The guilty one is not he who commits the sin, but he who causes the darkness.”

Is your OLRP Implementation Process SMART?