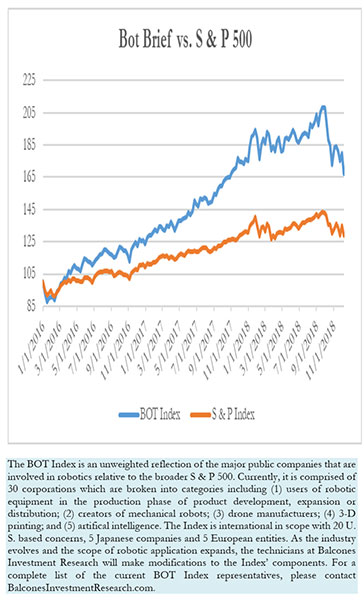 For the first time since the Bot Index was conceived in 2015, every one of its thirty company components were in negative territory for the week. The Index also experienced its second greatest downturn with a 7.05% fall. This compares with the 4.60% decrease in the S & P 500. There were five companies that turned in double-digit declines and three additional components with greater than nine percent pullbacks. The worst experience for the week was from Cyberdyne, a Japanese company that fell over 20 ½% and is currently trading at less than one third of its value near the beginning of the year. Omron Corp., down 10.75% and Fanuc, off 10.04%, joined Cyberdyne as other Asian headquartered names that were among the weakest in the Index. Faro Technologies fell 11.75% and Immersion Corp. declined 11.49% to round out the worst of the worst. Not all is lost on Immersion, however, as Simply Wall St. (a research boutique) issued a report this weekend that expressed its opinion that the company was significantly undervalued in the marketplace. Other near double digit decliners included NVIDIA whose 9.68% slide carried the stock to close the week at $147.61, virtually half its value of $280 in late August. The Chinese auto firm NIO declined 9.34% and Teledyne fell 9.16%.

The Professor and the Madman

The art of language is depicting items and activities in a consistent format such that society can understand verbal and written communication from one person to another. While that may sound somewhat logical and simplified, what if there was no dictionary to provide definitions of consistent language to describe those items and activities? What one person calls a stone, another might refer to the same item as a rock. If neither party understands the separate meaning for the same object, the communication is flawed. To solve this dilemma, some central forum was needed that could be a source for identification. It was this necessity that led to the gathering of linguistic definitions by Professor James Murray in 1857 to create the Oxford English Dictionary. In a fascinating book entitled The Professor and the Madman the author, Simon Winchester, detailed the difficulties of gathering all forms of definitions from around the globe to be standardized and incorporated into the definitive lexicon of the English language. The book is written as a linguistic detective story in which Professor Murray developed a friendship with his leading provider of data (over 10,000 definitions). The source of this amazing information flow was an American surgeon Dr. William C. Minor, who had been incarcerated for murder. Having been confined in a mental institution for decades he became the leading source of word descriptions for the Professor. As the two became dedicated to codifying the English language for the Oxford English Dictionary, they also became colleagues in producing one of the most important books ever written.

So, what does an effort undertaken over a century and a half have to do with modern day robotics? It should be known that there is a current enterprise involving thousands of solicitations for the development of Artificial Intelligence. In an amazing parallel to the efforts of Professor Murray, AI systems must rely upon data in the form of depiction by photograph or description to serve as the basis for their deep learning development. That data can only come from human input on the multitude of information needed to train AIs. For example, Mighty AI, a Seattle company, relies upon 300,000 individuals to provide street scenes for the education of autonomous vehicles. Just as Murray sought worldwide data to incorporate into the OED, robotic firms are soliciting individuals to provide learning tools for the advancement of Artificial Intelligence. It is yet to be seen if madmen will be among the participants.

In last week’s Bot Brief we noted our interest in monitoring the relationship of the going price of the newest and priciest model of IPhone and the number of shares it would take to purchase that model. What makes the ratio interesting is that it tends to contrast the price acceptance of consumers for the device with the motivations of investors that depend on the sales of that device. We went back to the original IPhone which was introduced by Steven Jobs and subsequent offerings over the years. Then we charted the price of a share of Apple stock to develop the ratio and follow its course. The following graph shows how the ratio has evolved over time. Much like The Economist’s development of its 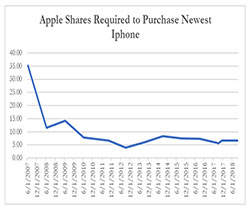 Big Mac ratio which endeavors to depict the cost of MacDonald’s flagship burger by various currencies, the IPhone/Apple stock ratio hopes to note tendencies of consumers and investors over time. The results are included in the following two graphs. The first is the long-term ratio and the second is year-to-date. Within the 2018 graph you will note that the jump in September of required shares is consistent with the introduction of the IPhone XS Max at a price of $1,449, up from the previous 2017 model at $1,149. Subsequent upward moves reflect the deterioration of Apple stock from $225 to $168. It is our hope that the ratio can be useful in its reflection of the either the value of the stock or the consumer acceptance of the device. 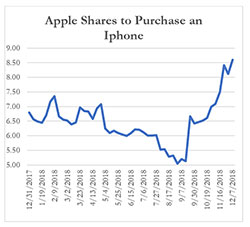 Welding with the Next Generation of OCTOPUZ Demo