There is no force on earth more powerful than an idea whose time has come.    Victor Hugo 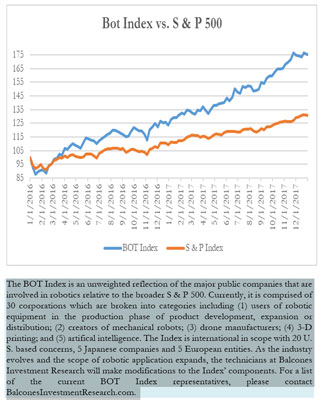 Trading in the final week of 2017 proved pretty anemic. The Bot Index fell .62% and the S & P 500 slid .36%. Within the Bot Index there were 16 of the 30 components that were in negative territory, with 3D Systems leading the weaker entities. Joining 3D Systems’ 9.24% decline were Mazor Robotics (-4.48%), Cyberdyne (-4.13%), IRobot (-3.55%) and Apple (whose apology for consciously slowing older IPhones drove the shares 3.3% lower). The only noteworthy positive contributor to the Index was Oceaneering International, whose 3.12% gain was primarily a result of oil prices rising above $60.

So, What Happened This Year:

As noted in the following chart, the equity markets performed well for most of 2017. Many of the world’s major markets noted double digit returns led by the S & P 500’s 19.42% total return and the NIKKEI’s 19.10% jump. The German DAX rose 12.5% and the FTSE 100 gained 7.6%. While it was a great year for most equities, the robotic sector experienced a fabulous year for its investors. The Bot Index rose some 35.36% for the year despite having a number of relatively poor performers.

The Bot Index included four internationally headquartered corporations whose stock prices more than doubled during 2017. Leading the pack were the Japanese concern Yasakawa Electric Corp., the Taiwanese firm Hiwin Technologies, the Israeli medical devices company Mazor Robotics and the U.S. based AeroVironment Inc. Nearing the ‘century’ return mark were Cognex Corp. and NVIDIA Corp. The table below notes the price return of the six leaders:

Within the Bot Index were six components that actually declined in 2017. All except Oceaneering International were stocks that trade at prices below $10. The following table reflects the degree of decline: 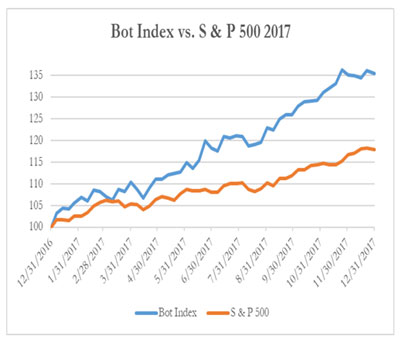 Is the Robotic Outperformance Trend Likely to Persist Into 2018?

There is an old adage that, “The market always fools the rehearsed response and the traditional reaction”. In that regard it would be wise to be skeptical of the pervasiveness of the robotics’ stock trend of such magnitude. In viewing the graph for the second half of 2017, it appears that the Bot Index might be losing some momentum. Indeed, since reaching an all-time high of 176.65 the Index has fallen three quarters of a percent while the S & P 500 gained 2.74%. Some of the decline is probably due to some overextension of the best performers for the year. Amazon dropped from $1186 to $1169, Yasakawa Electric fell 4.27%, Keyence declined 8.93% and Apple slid from $174.97 to $169.23 in the past month. Other issues impacting the Index in December go back to our prior discussions regarding companies which are reliant upon a single product such as 3D Systems which fell from $8.87 to $8.64, Intuitive Surgical that declined 8.34%, NVIDIA slid to $193.50 from $216.96 and Mazor Robotics dropping 17%. All had noted expanded competition for their franchise products during the month. 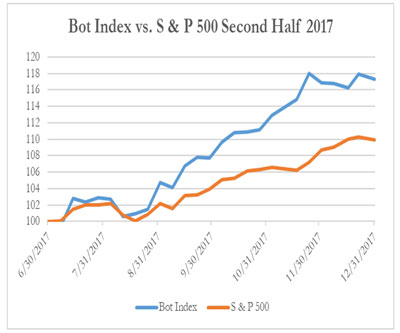 Still it is without a doubt that dynamic growth will accompany the Robotics Revolution in the years to come. With the level of geometric product development that such growth spawns, it will be increasingly important for the investor to stay abreast of developing trends that will gain new traction in the market or which might obsolete the product line of an existing holding. The Bot Brief will seek to provide some guidance to those new trends as they develop in the new year.