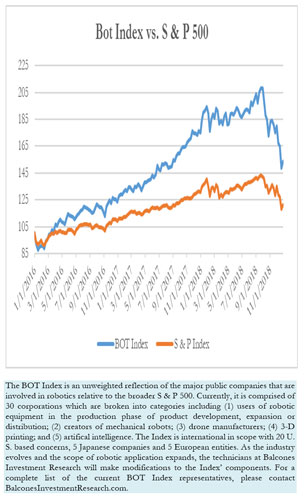 Paced by the strongest Christmas spending in over 6 years, stock markets experienced a marked turnaround in the past week. With gift spending up 5.19%, to the tune of $850 billion, the Dow surged over 1100 points, its largest ever one day move. Reversing four consecutive weeks of underperformance relative to the S & P 500, the Bot Index gained 3.08% versus the 2.86% improvement in the broader market. The bot rally was broad-based with only two of the Index’s 30 components in negative territory. Ekso Bionics continued its string of seven weeks of negative returns by dropping another 6.43% and United Technologies slipped .79%.

There were nine stocks that gained over 5% in the shortened trading week. The best performer was IRobot whose 7.78% improvement was based upon no less than three favorable Wall Street research reports. The second-best component was Amazon which turned in a 7.30% gain because of the report of the MasterCard SpendingPulse’s tracking of the Christmas spending. Shares of 3D Printing Co. rose 6.76% and NIO gained 6.59%. NIO’s shares were propelled by a Motley Fool article entitled, “Chinese Tesla Rival NIO’s New SUV is a Powerhouse.” Rounding out the better performers were: Oceaneering International (+6.55%), Google (+5.87%), Intuitive Surgical (+5.65%), Cognex (+5.48%) and Fanuc Corp. (+5.19%).

A short feature in LinkedIn, the social media employment service, weighed in on the impact of robots in the work force. With the title, “Will a robot take your job?”, LinkedIn writers cited the European Bank for Reconstruction and Development’s dire prediction that the Eastern European application of robotic production techniques in the field of textiles, agriculture and manufacturing would have a significant possibility of job losses. The article reported that in Slovakia, there was a 62% probability that their jobs would be eliminated. No data was offered to back up the headline claims.

A San Francisco firm, Savioke, reported that two hotels in Chicago and Cupertino have adopted their room service robots to deliver food, towels and toiletries directly to guests that request the items from the in-room Alexias. The three-foot and LED-festooned robots roll around floors delivering their packages and then returning to their central dispatch point.

Axios reported that the U.S., China and Russia are involved in a multi-billion-dollar defense spending ramp up on small robots. The arms race is creating diplomatic headaches as technology intellectual property rights are being broached and protection of tech secrets are becoming recognized as essential.

This week’s index reacted to the Apple stock increase to $156.23. With the price of the phone consistent, the index level dropped to 9.29 from 9.61. It will be interested if the numerator remains the same if Google Phone causes the price of the iPhone to decline. 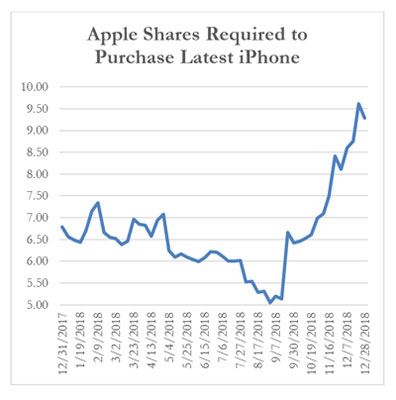