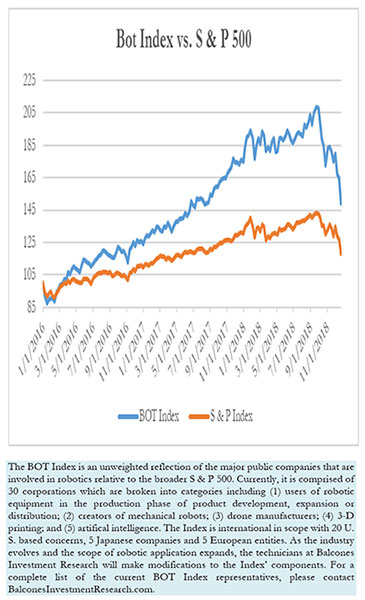 The Bot Index fell nearly double-digits during the week prior to Christmas, marking now five consecutive weeks in which the robotic stocks underperformed the broader market. The S & P 500 declined 7.05% as the Fed raised interest rates and political turmoil in Washington continued with the announced resignation of Jim Mattis, U.S. Defense Secretary over the Trump Administration’s decision to remove troops from Syria.

The Standards, They Keep a Changing:

Two weeks ago, the Bot Brief wrote about the parallel regarding the creation of the Oxford English Dictionary, as depicted in the Simon Winchester book The Professor and the Madman, and the current data gathering required in developing artificial intelligence. Interestingly enough, two additional issues associated with measurement and standards made headlines this week. First, and probably most profound, was the adjustment of the official weight of the kilogram. The National Institute of Standards and Technology announced it was working with the International Bureau of Weights and Measures to redefine the exact weight of a kilogram. Currently, a kilogram was simply contrived in 1889 as a portion of platinum-iridium alloy of a certain dimension. Since that time the world standard of weighing has remained constant and the lump of the alloy has served as the definitive benchmark measurement of weight. The snag, however, is that the official chunk has lost approximately 50 micrograms over the past 129 years. To correct the problem, at the General Conference on Weights and Measures in Versailles last Friday, scientists adopted a quantum mechanics format called the Planck constant which is believed to remain a forever uniform standard.

Also, this week, the AIA Global Vision Standards Update published its findings and decisions from the fall meeting of the Standards Committee. Essentially, the need for vision interface standards in industrial applications is important to affect a consistent uniformity, allowing software interconnectivity. With so many robotic applications requiring vision technology, a prescribed standard will further the ability of manufacturers to create new opportunities and reduce costs for existing efforts.

Lastly, the shares of Apple continued their decline this week and the implications of the iPhone to Apple Stock ratio rose to 9.61 from the prior week’s 8.76. The following graph reflects the price movement of the stock and how many shares are necessary to purchase the latest and greatest version of the iPhone. 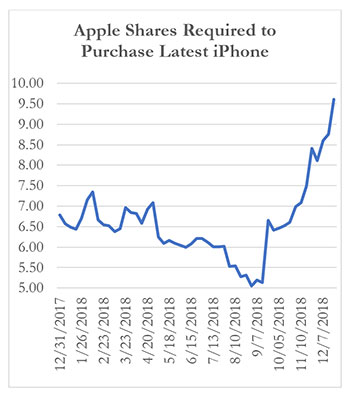 How Robotics Training Can Overcome the Workforce Shortage