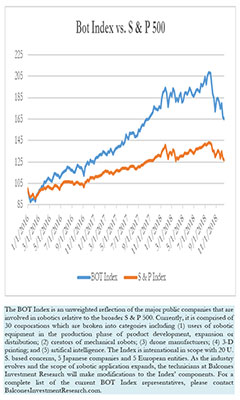 The Bot Index fell 1.33% during the week, marking four consecutive weeks in which the robotic stocks underperformed the broader market. The S & P 500 declined 1.26% as global investors were hit by the European Central Bank’s lowering of growth prospects and the domestic political front continued to lend uncertainty to Wall Street.

Despite the overall weakness there were a few bright spots among the bots. The best performer within the index was the 10.16% gain in the electric car company NIO. The company launched its ES6 SUV with a price tag of $52,000 and a battery life that is announced to have a range of up to 300 miles. Also riding the crest of good news were the shares of AeroVironment. Not only were there reports from Washington regarding 2020’s potential defense budget increases, Zachs published a piece recommending five stocks in the industry and included AeroVironment due to, “its expected 42.8% earnings increase this year.” The stock is rated a ‘strong buy’ by the research company. Joining NIO and AeroVironment in the positive column were ABB Ltd. (up 2.92%) and Northrup Grumman (increasing 2.01%). The former was a result of nearing discussions with Hitachi to sell its power transformers and electric substation business for $7 billion (or entry into a joint venture on the power division), while the latter benefitted from the aforementioned defense spending expectation.

Much has been said and written regarding the implications of the Robotic Revolution and its negative impact upon employment. Intuitively, if machines can do things better and cheaper than human workers, they will inevitably prevail, leading to widespread unemployment. History, however, presents us with a completely opposite story in many cases. The flawed theories of Malthus and Jevons proved the triumph of science over intuitive social economics. While it may have seemed logical to Malthus that the world could not provide the level of agricultural output to meet the demands of a rapidly rising population, he failed to foresee the dramatic ability of farmers and scientists to increase harvest yields. Likewise, Jevons predicted that the population would be inhibited due to the diminishing production of coal. Clearly, Jevons’ theory followed Malthus’ underestimating the ability of technology to solve the problems of mankind.

Marian Tupy, the editor of Human Progress, an offshoot of the Cato Institute, recently produced a study with BYU professor Gale Pooley regarding natural resource abundance. Citing a 1980 wager between biologist Paul Ehrlich and business professor Julian Simon, Tupy and Pooley reviewed the price patterns of 50 commodities between 1980 and 2017. In a period of significant population growth and the urbanization of China (where one would hypothesize that demand for commodities would rise), the price of the basket of the 50 basic commodities actually fell 36.3%. In fact, “the time that an average human must work in order to earning enough money to buy those commodities has fallen by 64.7%.”

Statistics, rather than theories (irrespective of how rational they appear), are the reason why the Bot Brief continues to maintain that robotics will be additive to employment rather than a pariah. Just as Tupy found that efficiencies, technological advances and the development of cheaper alternatives could contribute to vast expansion of commodities, robotics are likely to expand the vision of mankind into opportunities unknown today. As Tupy noted, “The Earth’s atoms may be fixed, but the possible combinations of those atoms are infinite. What matters is not the physical limits of our planet, but the human freedom to experiment and reimagine the use of resources that we have.”

The entire article, Introducing the Simon Abundance Index, can be obtained by communicating with Allison Ryan, Director of Media Relations of the Cato Institute.

Lastly, the shares of Apple continue their decline this week and the implications of the IPhone to Apple Stock ratio rose to 8.76 from the prior week’s 8.60. The following graph reflects the price movement of the stock and how many shares are necessary to purchase the latest and greatest version of the IPhone. 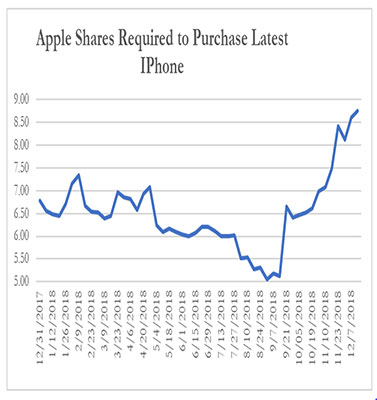