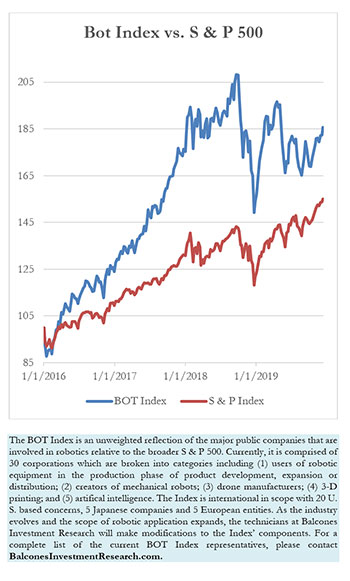 The markets were propelled by several political and economic events during the week. Pushing the markets forward were the on-again, off-again China tariff issues, the announcement of household net worth reaching an all time high of $113.8 trillion during the third quarter and the overwhelming defeat of the Labor Party in Great Britain, presuming to lead to an extraction from the European Union. Restraining the markets’ further increases were the report that retail sales were weaker than expected at only .2% and the House vote for impeachment of the Administration.  Consequently, the S & P 500 rose .73% and the Bot Index increased by 1.76%.

A full ten Bot names increased above three and a quarter percent during the week. Only two components declined by that same amount. Of the gainers, ABB Ltd. was the surprise inclusion with a 4.67% gain. The company was upgraded to a Zacks 2 – Buy due to increasing optimism on potential earnings gains. NVIDIA Corp rose 5.57% as it was included in Kiplinger’s Magazine in an article entitled ‘The 20 Best Stocks to Buy for 2020’. Cognex Corp. jumped 6.11% on a report that the company’s shares have been subject to a 5% increase in hedge fund exposure. The stock of Immersion Corp. jumped 6.34% as investors anticipated a good showing of the company’s new 15” haptic touch screen for automotive consoles. Other gainers included NIO Corp. that rose 5.75%, DDD added 3.27%, iRobot increased 3.28% and Ekso Bionics gained 7.41%.

There were only two losers of any magnitude. Cyberdyne lost 7.63% and Textron, who announced job cuts in its home office, fell 3.81%.

In August of 2017 we visited the Robotic Research facility of the University of Ljubljana in Slovenia. The advances taking place at the university were one of the reasons for Yaskawa Electric’s decision to invest into a significant new plant in the region. After two years of construction, the 25 million euro plant will employ 150 and is expected to produce 10,000 Motoman robots per year. Motoman is an industrial robot designed for high speed joining, packaging and general handling processes. 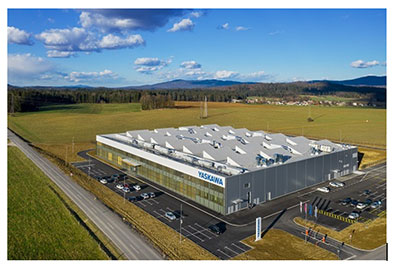