"There is no force on earth more powerful than an idea whose time has come."     -Victor Hugo

The Bot Brief is pleased to celebrate its second full year of weekly appearances on the website of the Robotic Industries Association. 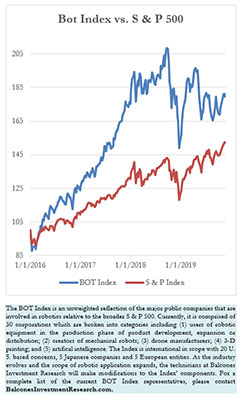 It was a peculiar week of trading for the companies within the Bot Index. While fewer than one third of the stocks posted gains, the entire index declined less than eighty basis points. The broader market fell one third of a percent. The 7.77% rebound from the prior week’s 9% drop allowed NIO Corp. to be the index’ best performer. The Chinese electric car manufacturer’s CEO, Li Bin, was quoted in a Benzinga Research article that “Spring for electric vehicles is near.” He was referring to his company’s recovery from a weak second quarter delivery season to a September that recorded a 4% increase and an October that saw a 25% jump in deliveries.

Joining NIO in the winners for the week was NVIDIA Corp. whose stock expanded 3.28%. The chip-makers chairman, Jensen Hwang appeared on CNBC’s Mad Money and has become a favorite of Jim Cramer. Clearly able to move markets, Cramer has praised the disruptive nature of NVIDIA due to it chip advances and speed. The company was also the focus of a Marketwatch article entitled, ‘Stock investors may want to hitch a ride with this car-related industry that is set for decades of big growth’. The company was cited as its chips are the most likely to spur the autonomous driving transportation revolution.

The worst performance by a Bot Index component was the 6.83% decline recorded by AeroVironment Corp. The company was hit by a $2 million fine by the U.S. State Department for possible export violations. The company evidently was involved in the export of sensitive materials during the period 2014 and 2016. Immersion Corp. and Yaskawa Electric each slid over 5% to round out the weaker issues for the week.

Earlier this month shares of the Japanese firm Keyence rose 12.65% on a significantly higher average daily volume. A Bot Brief feature noted that the company’s volume for the week had jumped by a factor of 20 times. Now we know why! In trading this week, Keyence announced a two for one split in the dollar denominated shares. Typically, companies split to enhance an expanded set of stockholders. With the shares trading at $687 the prior week, the new price was designed to entice new investors. In monitoring subsequent trading, however, it appears that the company should have opted for a higher ratio split in order to attract more retail traders.

In a suburb of tech-center Raleigh, N.C., UPS tested a delivery drone providing pharmaceuticals to a mobility-challenged customer. Working in conjunction with the pharmacy CVS and utilizing the Matternet M2 drone system, the company successfully delivered the product to the customer’s door. The company has received FAA approval to employ drone product transportation and has set up an entire division that is focusing on a more expansive application of the new opportunity.

Iris Automation has been licensed by the FAA to utilize its technology to provide drone flights to areas beyond sight lines and without human intervention. The company partnered with the Kansas utility company Evergy to utilize its fixed wing drones to inspect powerlines in rural areas. The company has had success in testing crash avoidance systems which led to the FAA approval.

A new analytical report issued by the Brookings Institute’s think tank centered on the changing impact that artificial intelligence will have on the employment and educational areas of the economy. The article indicated that AI “Could affect work in virtually every occupational group. However, whereas research on automation’s robotics and software continues to show that less-educated, lower-wage workers may be most exposed to displacement, the present analysis suggests that better-educated, better-paid workers (along with manufacturing and production workers) will be the most affected by the new AI technology.

Finally, as we were leaving our Austin, Texas office, we noticed that the airport has installed a couple of the new robotic coffee makers from Briggo. Here is a picture of one of the new facilities: