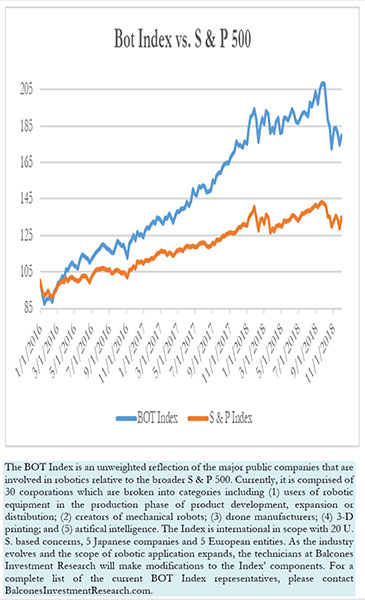 Paced by the best market week in two years, the Bot Index still had difficulty in matching the return of the S & P 500. Dovish commentary by the Fed Chairman and an improving outlook for international trade stimulated investors to boost the general market by 4.85%. The bot stocks also improved but not nearly at the rate of the market. Gaining some 2.82%, the Bot Index was restrained by four components that experienced significantly lower prices. Leading the weakness was AeroVironment who lost fully 15 ¼% of its value. This follows on the heels of an almost double digit decline of the prior week’s trading. The company reported earnings of 29 cents per diluted share which was ahead of analysts' expectations of $0.16 earnings per share. However, the company's revenues of $73 million were below analysts’ expectations of $74.5 million. It is likely that the 25% market value decline is overblown particularly in light of the company’s strong backlogs. The stock could have, also, been negatively impacted due to an error in revenue reporting by the Associated Press. In a November 30 retraction, the news media indicated they had falsely reported that the company experienced revenues of $47.1 million in stead of the $73 million figure.

Also contributing to the underperformance of the Bot Index were shares of Accuray Inc. down 9.09%, United Technologies whose 5.58% slip was due, in part, to S & P Rating Service’s downgrading the company’s debt to BBB+, and Ekso Bionics whose investor favor declined 4.12%.

Responding to an almost halving of the stock price since the end of the third quarter ($281 to $145), the management of NVIDIA increased its dividend and expanded its repurchase program by $7 billion. As a result, the company rebounded 12.71% during the week to lead the Bot Index. Not far behind NVIDIA on the performance spectrum was Amazon whose Black Friday and Cyber Monday results propelled the shares upward by 12.52%. Hiwin Technologies and Faro Technologies each gained over 9% and YASKAWA Electric and Intuitive Surgical rose above the 8% mark. Intuitive Surgical was featured (along with General Mills and Alphabet Corp.) in a Motley Fool research article entitled, “3 Stocks to Buy and Hold For the Next 50 Years.”

We cited the relationship between Apple’s IPhone and the Apple shares that would be required to purchase the device in last week’s Bot Brief. We received such a significant amount of interest and commentary that we wished to delve deeper into the concept. Much like the ‘Big Mac’ Index that The Economist periodically runs to indicate the purchasing power of various currencies, the IPhone-to-Apple stock may provide some perspectives on the state of the industry. The following graph depicts the introduction date of each of the series of IPhones since their inception on June 29th 2007. At that time, adjusted for splits, Apple stock was trading at $17. The new phone was staged by Steve Jobs at the MacWorld Convention and was priced at a premium $599 for the most powerful model. Since that initial introduction the prices of subsequent models have ranged from the current $1449 for the IPhone XS to a low of $299 that was prevalent in the 2008-2010 series. 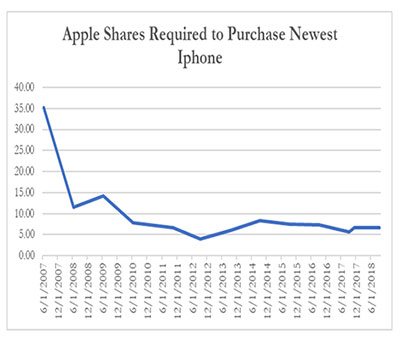 What makes the ratio interesting is that it tends to contrast the price acceptance of consumers for the device with the motivations of investors that depend on the sales of that device. The Bot Brief will develop a periodic review of the ratio and will provide commentary as to its interpretation in future issues.