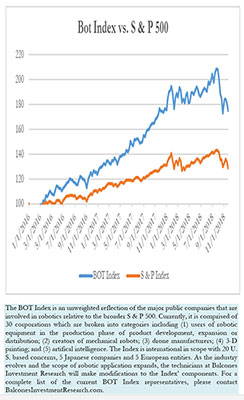 Perhaps the announced fall of 4.4% in durable goods total orders during the month of October contributed to this week’s decline in the Bot Index. The Index fell 3.28% which was a shade better than the 3.79% topple in the combined stocks within the S & P 500. This was hardly any reason for investors in robotic stocks to celebrate since the Bot Index has now recorded negative results in seven of the past eight weeks and is below the year’s starting level. Every single U.S. based company within the Index declined and the only three gainers are headquartered in Taiwan, Japan and China.

Due to the virulence of this level of risk-off investor behavior it is highly likely that some settling in the market should soon occur.

Leading the losers was once NASDAQ darling, NVIDIA Corp. Blaming excess chip inventories, revenue expectations for the quarter were not met and a new guidance for fourth quarter was about $700 million below analysts’ predictions. The stock tumbled 11.82% for the week and is probably starting to represent real value. This prompted Citron Research (a perennial short seller) to announce that it had established a new position in the company’s stock.

With the 10.98% decline last week, it would now take seven and a quarter shares of Apple stock to purchase one IPhone X! Beset with supplier rumors and forced to reduce the price of its IPhone XR in Japan due to sales resistance, the stock is tumbling under a wave of bad news that seems never ending.

The newest member of the Bot Index, NIO Corp. was one of the only three up stocks for the week, gaining 3.76%. The Chinese automaker has had a turbulent history since its IPO in September with the stock ranging from

This week HBO launched a documentary by director Maxim Pozdorovkin entitled “Robots Are Killing People. How Worried Should We Be”. With such a sensational title one would question ‘How many people are being killed??’ Well, the article only mentioned one individual that was killed by an errant robot arm that crushed the co-worker in the work force and a Tesla self driving vehicle that ignored a semi truck into which it crashed. These two incidents hardly would justify the documentary title. The likely life-saving capabilities from autonomous cars was being largely ignored.

The design firm Aprilli has developed a concept vehicle that is part automobile and part hotel room. The vehicle was reported in UK’s Daily Mail as having a bedroom, shower and living quarters that would move down the highways to predetermined destinations. Even ‘room service’ with meals and drinks would be drone delivered through an open portal in the roof of the concept.

Kroger announce it would be opening the first of twenty grocery warehouses at its Cincinnati headquarters. The firm is expending $55 million to fit the new distribution pilot with robotic technology to help it compete with Amazon in the grocery business.

The New York Times ran a feature article that favorably reported on the utilization of agricultural robots at Taylor Farms in California. Citing a 2017 survey by the California Farm Bureau Federation indicating that 55% of farm managers experience a shortage of labor. The introduction of robots in harvesting and packaging saves both time and money in the time critical agricultural business.