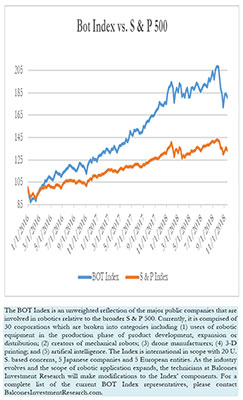 The woes of the stock market continue to hang heavily on the robotic stocks. The S & P 500 fell 1.61% last week, helping drive the Bot Index to a decline of 1.79% to the 180.93 level. From its high on September 21, 2018, the Index has fallen into ‘corrective’ territory with a 13.15% reduction. Fully two thirds of the components declined during the week and several of the ‘prominent’ names in robotics led the weakness. The chip maker NVIDIA, whom an analyst from InvestorPlace (and carried on Yahoo Finance) stated, on October 26, “Buying Nvidia Stock Below $200 Is a No-Brainer.” Since the stock fell 20.05% last week on its poor earnings, perhaps the article should have been “Burying Nvidia Stock…..”

Other prime participants in the Index’ decline would be industry stalwarts Amazon who fell almost 7%, Apple whose troubles carried it down another 5.35% and Cognex that slid 5.24%. Shares of Ekso Bionics (-5.61%), Accuray Inc. (-5.99%) and Oceaneering International (-5.84%) contributed to the Index’ affliction.

On the positive front the better performers included the Japanese issues Cyberdyne who rose 5.72% and Yaskawa Electric’s which increased 4.51%. The only other decent return was recorded by Immersion Corp. whose shares gained 4.14%.

It has been exactly one year since the Robotic Industries Association started carrying a version of the Bot Brief on its official website https://www.robotics.org/. In looking back at that very first edition posted on November 20, 2017, it is interesting to review changes that the ensuing year presented. Remarkably, the index was experiencing a new high which would carry its trajectory upward throughout most of 2018. In that November 2017 issue we noted that both Houses of Congress were debating the Administration’s proposed tax reduction package and the Bot Index rose about one percent to the 171.21 level. It currently stands at 180.93, as much of the 2018 gain has been wiped out since peaking at 208.30 in late September.

In reviewing individual components of the index that year-ago week, we cited the announcement by Ford Motor Co. that they had conducted a beta test of Ekso Bionics’ exoskeleton support device in their manufacturing plants with much approval from the test participants. Consequently, the stock jumped 56.1% to $2.39; however, since then there has been little carryforward as the stock is now trading at $2.09. Ironically, the stock appears on this week’s largest losers list with a 5.61% decline. Thus, a year ago one of the best, today, not so much so.

In another issue the Bot Index noted that ReWalk Robotics was trading down 16.7% as the company priced a 6.8 million share offering. The stock had been trading at $1.38 during the prior week and despite a Zachs Research report that mentioned the company as one of five “Breakout Stocks Offering Admirable Returns”, the Bot Brief noted that “In reviewing (Zachs’) screening techniques, the Bot Brief has considerable doubts about the veracity of the analysis.” We were certainly correct in that assumption as the stock subsequently fell to a point where the analysts at Balcones Investment Research were forced to pull the company from the portfolio and the stock is now trading around 24 cents.

The Video Test Pilot of the Bot Brief is now on YouTube:

We have been working on a ‘made for TV’ version of the Bot Brief for several months now. The pilot runs about 29 minutes and contains a discussion on the weekly movements of the stocks that were, for that week, positioned among the ends of the performance spectrum. The video contains interviews with Jeff Burnstein of the Robotics Industries Association and Dr. Arthur Laffer a former member of President Ronald Reagan’s economic advisory team and is considered as the father of supply side economics. To reach the YouTube site please refer to this URL: https://www.youtube.com/channel/UC6u3t46KheJavyHMH-4wKgA?view_as=subscriber