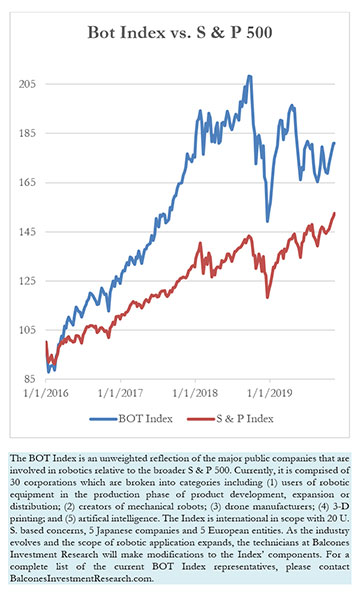 The Bot Index and the S & P 500 each turned in tepid performances in the past week. Both were up but neither added 1% to their respective indexes. The bots were blessed with two companies within the index that rose well into double digits. Leading the charge were shares of Qiagen NV. that saw a 28.31% improvement during the week. The stock was initially boosted by a JP Morgan Research upgrade to overweight from underweight. With the ratings improvement the analyst also increased his value target from $25 per share to $40 per share. This reassessment was probably based upon rumors about a potential set of takeover offers. The most credible of those was a projection that Thermo Fisher Scientific was interested in a potential $8 billion offer for the company. There seems many synergies and analysts have felt that the potential merger would be first year accretive.

Weaker issues for the week were generally those same companies that have experienced investor dissatisfaction throughout the year. Cognex fell 3.62%, 3D Systems declined 4.57%, iRobot continued its slide by another 8.49% and Ekso Bionics and Cyberdyne retreated to the tune of 9.84% and 6.88% respectively. Joining the week’s losers was NIO Corp. that gave back 9% of the 30% gain it recorded in the prior week.

In the latest popular suspense TV show, The Blacklist, the plot centered around the use of Artificial Intelligence to murder a prominent scientist in that field. In a bizarre set of circumstances it turned out to be a murder suicide situation involving a computer named Clark (interesting parallel with the computer named Hal in 2001 A Space Odyssey). The AI computer was programed to only promote mankind. In applying such logic, it determined to kill any potential AI researcher that would expand the use of AI that would be a hazard to man. Therefore, it killed it ‘creator’ and was attempting to eliminate other prominent AI scientists and then commit suicide on itself. A pretty far-fetched plot but not too far from the Terminator series that Hollywood has invented to introduce a new set of villains.

In a significantly more intellectual environment, the latest issue of the American Economic Journal carried an article that may start the process of understanding the complex taxation and labor/machine substitution that will become present in the near future. The feature was entitled ‘Optimal Taxation with Risky Human Capital’. Authored by Professor Marek Kapicka of the Charles University in Prague and Julian Neira of the Exeter Business School, the tome provides an in-depth analysis of, “an economy where people are ex ante heterogeneous in their productive abilities and have two ways of investing in a risky human capital: learning effort, which takes time, and schooling, which costs money.” In reviewing those two alternatives, the authors present several viewpoints regarding the application of capital in labor categories. It is our hope that future research will build upon this analysis to answer the question of how taxes will be applied, and how the population will be educated as we enter the Robotic Revolution.