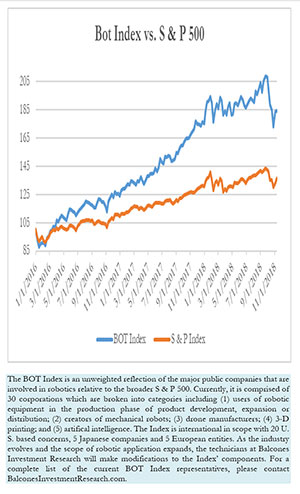 You may recall from last week’s Bot Brief the Asian constituents of the Bot Index performed remarkably well with Hiwin Technologies gaining a spectacular 25.54%, followed by double digit increases by OMRON Corp. (+10.08%), Fanuc Corp. (13.41%) Keyence (+14.51%) and Yaskawa Electric (+17.47%). Cyberdyne Inc. also increased 6.88% for the week. Well, this week’s trading was a different story with three of the aforementioned companies among the largest losers. Yaskawa Electric fell 8.46% while Hiwin Technologies gave back 5.69% and Fanuc Corp. slid 7.51%. The sole domestic name that experienced a significant market deterioration was Immersion Corp. The company dropped 9.91% following its report of third quarter earnings that saw both revenues and earnings falling fromthe comparable 2017 period.

Among gainers, AeroVironment led the pack with a 9.09% market improvement as it was awarded a $3.2 million contract from the Department of Defense on behalf of an allied nation. NIO Corp. was the beneficiary of a Market Realist article that mentioned that four of the ten analysts that follow the company have ‘buy’ ratings on the stock and made the comment that “As a player in the world’s largest auto market, NIO has an opportunity to grow faster than Tesla.” Three defense companies performed well for the week with Textron gaining 5.18%, Lockheed Martin up 4.62% and Northrup Grumman increasing by 4.36%.

Most of the Bot Index Companies Have Reported Their September Quarter’s Results. Here is a Brief Glimpse:

All EPS are fully diluted YOY as reported by Morningstar. * Denotes July quarter.