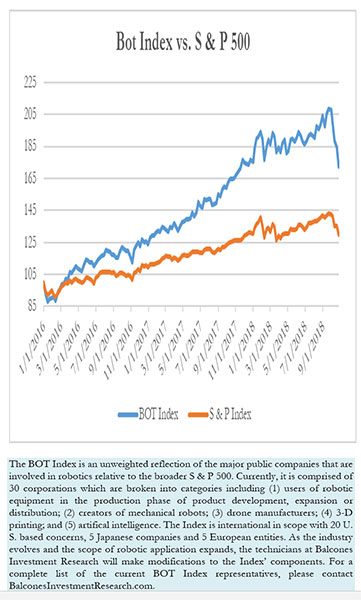 So now we have five consecutive weeks of negative returns from the thirty stocks that comprise the Bot Index. In this week’s trading twenty-nine of the components (which is a record!) were in negative territory while the sole gainer was a result of a previously announced takeover. That stock’s (Mazor Robotics) eight cent improvement was just an arbitrage between the then current price and the takeover value.

Within the losers’ column, six companies traded down double digits during the week. The worst of the worst was the 20.14% deterioration in the price of Oceaneering International. The company reported a $66 million loss in the third quarter which amounted to a fall of $.14 per share from continuing operations. The loss was compared to last year’s three cent gain. Investors were most disappointed by management’s reduced guidance for the fourth quarter.

The Taiwanese company Hiwin Technologies continued its volatility by falling 14.55% for the week. Having steadily increased during the first quarter of the year, the stock peaked out on April 20th at $504 and has deteriorated to last Friday close of $182.

The third worst performing bot company for the week was NVIDIA Corp. The company’s 13.48% slide was primarily in sympathy with the poor earnings guidance by Advanced Micro Devices. AMD reported excess gaming chip inventories in the third quarter and did not expect any pickup during the fourth quarter. Investors noted the similarities in the chip mix between the two companies and feared NVIDIA could suffer the same fate.

Closely following NVIDIA’s decline was the Chinese auto firm NIO Inc. whose stock plummeted 13.25%. NIO will be reporting quarterly earnings on November 6 and some investors clearly anticipate a weak statement in the short period since the company’s U.S. public debut. Virtually all Chinese stocks have been weaker since the imposition of trade and tariff issues.

Despite great earnings and a fabulous backlog shares of Northrup Grumman were traded down over twelve and a quarter percent. Other defense stocks were also hammered during the week. This week’s decline appears overextended and many consider that, at the current price level and P/E of 21x, the stock represents a good buying opportunity.

Rounding out the double-digit decliners was IRobot Corp. While the company posted excellent earnings during the week – certainly enough to propel the stock upward - investors, however, financially expressed their concerns that costs are rising and IRobot may not be able to pass those costs on to the consumer. Shrinking margins accompany raw material cost increases. Seeking to maintain margins, on the other hand, reduces sales. Both of which tend to lower profits. Both of which, also, reduce investor sponsorship.

So What Did The Economist Have To Say About Manufacturing In The U.S. This Week?

Typically laws in the world of economics are a function of logical reasoning. The Law of Supply and Demand, The Philips Curve, The Pareto Distribution are easily understood due to their observable causes and effects. However, just as surely as there are immediate economic actions and results there is another law of economics that is less transparent. This is the law of ‘Unintended Consequences’.  One of the most interesting of these unintended consequences occurred in 1969. No, it was not that the U.S. put a man on the moon in that year. That has had limited impact upon the economy. The real economic event, however, came as a result of the Cuyahoga River in Ohio catching fire. Ohio was considered one of the epicenters of manufacturing in the U.S., catering to the automobile, fabrication and metal production industries. A byproduct of these activities was the improper treatment of waste materials and, as was in the case of the river fire, flammable materials made their way into the water systems. 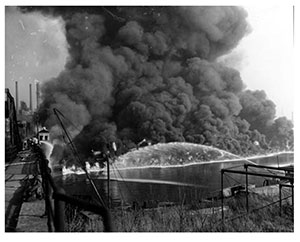 The flambe Cuyahoga became a tipping point which captured the national attention of environmentalists. As a result, a number of very stringent laws were passed and the Environmental Protection Agency was formed. The immediate impact of these regulatory actions had the desired effect, as waterways and air quality vastly improved. The unintended consequences, however, were less obvious yet had one of the most powerful implications on the economy in the 20th century.

Prior to the Cuyahoga incident, manufacturing accounted to about one third of U.S. employment. By 2010 that percentage dropped to single digits. The cause of this decline was typically attributed to cheap production outside the U.S. where labor and newer manufacturing facilities could trump transportation costs. Doubtlessly this is factual, however, it is certain that U.S. manufacturers simply couldn’t compete due to the myriad laws of environmental restrictions that were not prevalent in many developing countries.

Fast forward to today’s robust manufacturing activity in the U.S. As The Economist noted, “Industrial Output is on a tear, and the last few months have seen the best run for growth in manufacturing jobs since the late 1990’s.” Could it be that manufacturing that uses a combination of human and automation can overcome environmental concerns, offset obvious and opaque labor costs and produce quality U.S. products? That possibility could be the unintended consequences of the robotic revolution!

Tips and tricks for robotic welding. ABAGY has launched a new YouTube channel