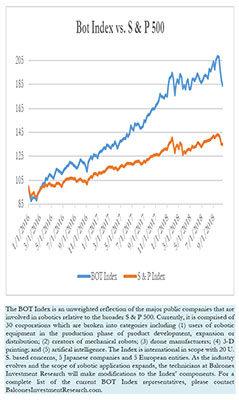 This week’s 2.11% market decline makes four straight weeks that the Bot Index has experienced negative returns. There was little headway by the seven companies within the Index that noted some modicum of gain. The best return was recorded by Hiwin Technologies who managed a mere 1.91% improvement. Two other Asian components – OMRON Corp. and Keyence Corp. returned 1.66% and .13% respectively. Other stocks that ran contrary to the Index’s trend included Northrup Grumman (+1.75%), Faro Technologies (+.23%), Lockheed Martin (+.16%) and AeroVironment (+.16%).

While twenty three of the thirty stock Index were disappointing to investors, the greatest regrets accrued to holders of Textron Inc., whose stock fell 12.78%, NVIDIA Corp. and Oceaneering International. Textron reported extremely disappointing earnings for the third quarter. Revenues were expected to come in around $3.5 billion, however, weakness in industrials and systems divisions pulled sales down to $3.2 billion. Consequently, earnings were inured to the tune of $15 cents below estimates. Total earnings for the quarter were $2.26. Adding to investor woes was the report by management that guidance for the entire year would see the earnings at $3.20 to $3.30 versus analysts’ expectations of $3.33. Ironically, the day prior to the earnings announcement, Jim Cramer suggested that Textron was one of his industrial favorites.

The Bot Brief has long maintained that one of the major benefits of the new era of robotics will be discoveries in space and underseas. This week the scientific world was abuzz with the discovery of what is being termed as endoterrestrials (ED). These microbes are found 6,000 to 11,000 feet underground/water and may constitute between one tenth to one-half of all living organisms. The very fact that they can survive in an environment of intense pressure, no oxygen and nothing organic of which to feed has led to a vast realization of the potential unknown life undersea and in the farthest reaches of space. In fact, the very minerals that spawn the microbes on earth are prevalent on other planets just within our own solar system. The need for oxygen isn’t as necessary as was prior hypothesized.

CNBC reported this week that there are a growing number of consortiums within the automobile industry to work through the costs and technological challenges of creating the autonomous automobile. The side benefit of the creation of alliances, in addition to spreading the costs, is the leverage on regulatory bodies to approve the self-driving car concept.

The Daily Herald ran an article regarding the more extensive use of drones by police forces across the nation. The feature noted the low cost of the information provided by drones and their ability to be employed by virtually any police force. Not only do drones provide a security feature for uniformed police, but also serve as a time saver in seeking missing persons. In some instances, information is shared with fire departments which could also be a life saver for both victims of fires and the firefighters themselves. The low prices and quick ability to master the skills requiring the crafts, have prompted many smaller and rural departments to utilize these new tools. Perhaps, like body cameras, virtually all police and fire departments will find drones to be an essential adjunct to their array of civil service capabilities.

The Wall Street Journal ran a piece entitled, “How Autonomous Vehicles Will Reshape Our World.” This piece involved an interview with the former NYC traffic commissioner who expounded on the implications on insurance, traffic control, accidents and the general positive consequences that self-driving vehicles will have on society.

Finally, the Channel New Asia produced a feature entitled, “Postman, shopper, builder: In Japan there’s a robot for that” which was their take on the World Robot Summit which was held in Tokyo. The article noted a panoply of various uses in which the demographically challenged Japanese economy requires that robots can fill.