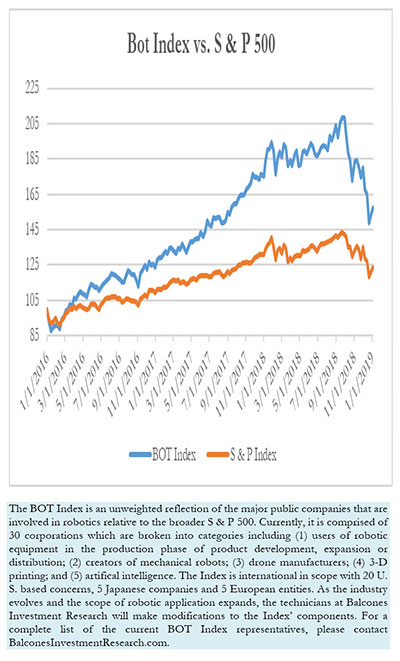 The negative report from Apple regarding its revenue shortfall on last week’s market was trumped by a more dovish Fed dialogue and the extraordinarily positive employment number posted on Friday. The Bot Index consequently rose 2.17% versus the 1.86% improvement in the S & P 500 for a two-week run of outperformance. The gainers within the Index included the 26.72% explosion by Ekso Bionics whose low-price stock rebounded from poor earnings and revenue posted for the September 2018 quarter. Oceaneering International’s jump of 12.88% was precipitated because of an $827.7 million Navy contract and reports of insider buying by the company’s CFO. Immersion Corp. announced it had entered into an agreement with Google to provide a new generation of Haptic devices (touch) involving Google’s hardware consumer products. The stock rose 6.73%. Rounding out the significant gainers for the week were Amazon (+6.59%) and Google (+3.24%).

The weaker names in the Index included mostly Asian stocks that were not stimulated by the Friday jobs report announcement. Hiwin Technologies dropped 5.66%, Cyberdyne fell 2.55%, the Chinese electric vehicle company NIO declined by 1.7% and Yaskawa Electric shrunk by 1.58%. Shares of Apple stock dropped 5.1% for the week.

Where Do We Go From Here…..Apple

Paraphrasing an old Chicago tune from the 1970’s, “I know its hard for you to change your way of life” is a possible metaphor for the current condition of the Apple Corporation. A company that has a huge reputation and an equally dynamic consumer following is possibly at a corporate crossroads. This week the company announced it would be facing a $7 billion shortfall in revenues in first quarter guidance. While the blame was placed on weakness in sales within China, many analysts are looking more deeply into the Apple’s strategic positioning. Is the company on the verge of becoming a ‘value’ versus ‘growth’ stock with its 12x multiple? Is the company starting to be a ‘yield’ play? Is Apple’s fate not unlike that of General Electric?

Since the Bot Brief began charting the relationship between the stock of Apple and its most significant product, the iPhone (59% of revenues in 4Q 2018), it has become apparent that there is a growing disconnect between the stock price and the product price. While the stock is somewhat at the mercy of a very capricious market, the company has entire control of the price of iPhones. In our analysis, the company is pricing themselves out of the phone market, a market which is becoming something of a commodity with many powerful entrants. The law of diminishing returns regarding the technology and features of the iPhone is occurring and one must question just how many loyal Apple fans will jump at each new product offering?

Back to Chicago’s lyrics, “Forget about the past and let your feelings fade away. If you do I’m sure you’ll see the end is not yet near.” We at the Bot Brief would hope to see Apple take its massive capital war chest and apply it in the M & A field or in robotic technological development. The iPhone is a great cash cow but if the company wants to stay a growth play other avenues for revenue expansion must be explored and applied. If played properly we believe the company can achieve this and ‘the end is not yet near’ 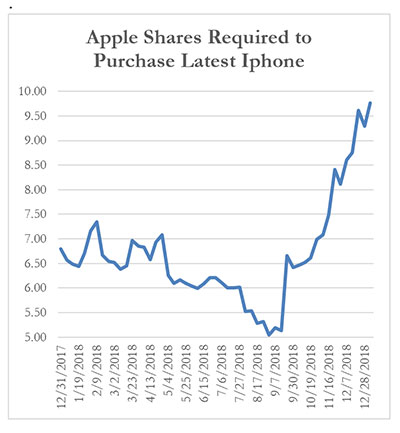