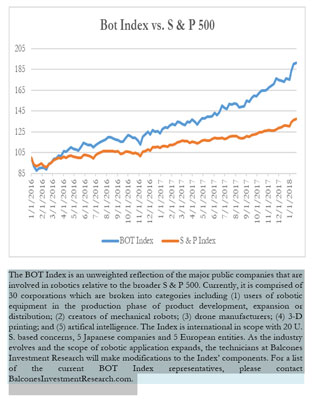 While the Bot Index reached a new high mark in trading last week, it failed to match the 0.86% return of the S & P 500. Closing at the 191.09 level for the first time, the index is approaching the point of doubling its value since its inception at the beginning of 2016.

The index was bolstered this week by continued strong performance of Japanese robotic manufacturers. Keyence rose 8.35% while Yasakawa Electric added another 8.13% to the 7% that it notched on the prior week. Both companies were featured in Barron.com articles. Yasakawa also was cited as a member of ‘disruptive technology’ by HSBC analysts. The  HSBC analysis has identified five phases of ‘disruptive technology’, with Yasakawa in the fourth ‘real application’ cycle that is more advanced and financially viable. HSBC anticipates that the firm will progress to the ‘new normal’ arena where its products become mainstream and are no longer considered disruptive but market accepted. Fanuc Corp., a Bot Index component, was also noted as approaching the ‘new normal’ phase in the research piece. Shares of Fanuc have performed well in the past quarter, moving from $19.36 in early September to closing this week at $28.72.

Providing further evidence of superior performance by Japanese components of the Bot Index, the sensing and control company, OMRON, gained 3.3% for the week.

Weaker performers during the period included 3D Systems who gave back 4.74% of the 19.17% gain of the prior week, Ekso Bionics dropped 11.94% as it is facing increased class action lawsuits over its recent performance and ReWalk Robotics lost 4.55% for the same reason.

In our April 7th edition of the Bot Brief we reported on an Israeli firm, Airobotics, who announced a new drone designed to carry 2lbs without a human pilot on the ground. The firm reached a milestone by having been the first drone manufacturer to be approved to fly completely autonomously. The drone could fly for a half hour and was designed to provide surveillance, industrial data gathering and monitoring. The company developed simple-to-program software to accomplish its various tasks. Some months ago, the Bot Brief, suggested the U.S. southern border ‘wall’ could be better accomplished by developing a ‘metaphorical’ wall that would blend the observation strength of drones together with autonomously driving land vehicles. We felt that Airobotics’ new craft could provide a part of that proposal.

Fast forward to this week and an update on the progress of Airobotics systems and market acceptance. In a breakthrough, Airobotics’ drone received certification to fly at customers’ sites Beyond Visual Line of Sight (BVLS) in Australia. This approval contributed to the company’s winning a bronze Edison Award for automated industrial drones. The company has now raised $42.5 million to expand operations and develop markets internationally, with offices now located in Israel, Australia and Chile. It has enhanced its self-docking stations which completely negates the need for human maintenance, launch, piloting and recharging.

In an interesting corollary, Fox News ran a special report on technology used in border security. The U.S. Border Patrol is testing drones in a stretch of the west Arizona desert where there is virtually no fence nor identifiable border. With the U.S.-Mexican border stretching almost 2,000 miles, a sensible ‘metaphorical’ wall would certainly provide a cheaper alternative to physical wall construction in less populated areas. Since drones can travel quickly and provide a visual assessment of activity, which sensors cannot provide, the drone solution provides a measure of safety to Border Patrol officers as they seek to intercept intruders. While the article did not announce the manufactures of the test drones, it did mention there were two fixed wing drones and a single quad copter that were being utilized in the assessments. Certainly, the expansion of drone applications in the field of security and surveillance will provide opportunities for firms such as Airobotics and AeroVironment in upcoming years.