"There is no force on earth more powerful that an idea whose time has come."     -Victor Hugo 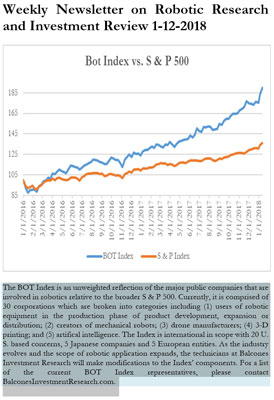 The first two trading weeks of 2018 have certainly proven lucrative for investors in the mainstream robotic industry. Following the prior week’s 4.72% increase, the Bot Index jumped another 3.51% this week. Again, this week the movement of the Bot Index exceeded the return of the general market which rose 1.57%, as reflected by the S & P 500 Index.

The remarkable gain in the Bot Index this week was paced by two stocks that experienced double digit returns. 3D Systems announced a printing solution that allowed new customer KALLISTA to design a revolutionary faucet that incorporated 3D Systems’ production capabilities. The design team at KALLISTA noted that they were unencumbered by traditional manufacturing restrictions, saving significant time within the tooling production. Marketed under the Kohler label, the faucets are made from 316 high quality stainless steel and the design incorporated a discrete water flow pattern. The stock, which has been under pressure this year, jumped 19.17%.

The other double-digit performer during the week was Intuitive Surgical. Shares of ISRG rose 10.56% as a result of its announcement of sales expectations that exceeded Wall Street opinions. Final fourth quarter and full year sales and earnings will be released on January 25, however, the preliminary expectations issued by the company indicate a gain of 18% for the final quarter and up 16% for the full year.

Further contributing to the Bot Index’s performance included the Japanese stocks Yaskawa Electric and Fanuc. Both companies benefitted from the NIKKEI’s rise of over 400 points from the 5th to the 9th. Both companies finished the week gaining over 7%.

A Brief Look Back at the November 17th Bot Brief:

In the November 17th issue of the Bot Brief, we noted that one of the Bot Index’s components, Rockwell Automation was subject to a second takeover offer by Emerson Electric. The price amounted to approximately $225 in cash and Emerson stock. At that point ROK was trading at $193.61. In reviewing the potential for an arbitrage trade, the Bot Brief felt that the best situation might be to employ the use of options. We suggested that the safest play might be the writing of cash covered puts with a strike price of $200 and an expiration in January. For the establishment of the put, the writer would receive approximately $1,050 per contract and, if the stock closed above $200 by January 18, the put would not be exercised and the full amount of the premium would accrue to the writer. While the Emerson Electric offer was rejected by the Rockwell Automation Board, the stock price of ROK has continued to rise, closing at $207.92 as of this past Friday. So, now the writer has a choice of waiting out this week and presuming that the stock will remain above the $200 strike price and will become the beneficiary of the entire premium received, or he can choose to close out (buy back) the option and pocket about a thousand dollars per contract as the option price is bid $.10, asked $.40. Either way the writer has achieved a rather remarkable short-term gain for putting up no capital.