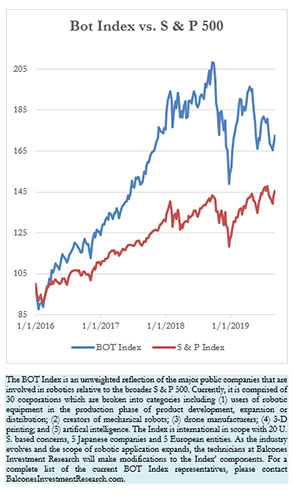 The initial week of September proved propitious for the Bot Index. For only the second week in the past seven, the bots outperformed the broader index. The Bot Index rose 2.58%, exceeding the S & P 500’s gain of 1.785%. Some good employment news and possible progress in the ongoing tariff trade wars between the U.S. and China were the market’s stimulants.

Seven of the bot components gave their shareholders 5% or greater returns during the week. The only double-digit performer was the U.S. based drone company AeroVironment. AeroVironment reported earnings that blew away Wall Street’s expectations as well as adding incrementally to full year guidance. For the first quarter AVAV revenues came in at $86.9 million and earnings of $.71. Consensus estimates were for revenues of $86.3 million and earnings of $.35. For the full year, management suggested sales of $350 million and EPS of $1.35-$1.55.

NVIDIA Corp’s 6.65% increase for the week was attributed to its introduction of the new Quadro RTX 6000 mobile GPU. The moderation in hardline U.S. and China trade talks futher contributed to the stock rise, as NVIDIA generates 25% of its business in China.

3D Systems gained 6.29% in something of a dead-cat bounce as the stock had dropped  25% during the month of August. Zach’s Research issued a report indicating that the company has been reducing employment and cutting costs to try and overcome weaker sales. The Entertainment Division was disbanded and the company indicated it would focus on printers, materials, healthcare and software.

The only double-digit decliner was Ekso Bionics who fell another 12.12% on top of the prior week’s 13.16%. Even with its heavy debt load it doesn’t appear that the company is in jeopardy of bankruptcy. The $.58 price might represent some buying potential for aggressive investors who see value in the EKSO product line.

It is sad to see the high flying Intuitive Surgical Company among the four losers for the week. The stock fell 1.19% as competition from Medtronics has gained investor favor. It didn’t help that the company’s Chief Operation Officer announced an insider sale of $600,000 of the company stock.

Productivity is the Key:

The purpose of both the agricultural and industrial revolutions was the enhancement of labor output. So will be such with the robotic and automation’s disruptive force. Of the twin drivers of economic growth, labor force growth and productivity, the application of robots in both manufacturing and service sectors will negate the limitations imposed by demographics. In the most recent issue of the Bureau of Labor Statistics non-farm labor productivity gained 3.5% in the first quarter and 2.3% in the second. These numbers compare with 1.3% in 2018, 1.3% in 2017 and .3% in 2016. While we are in the early stages of the robotic revolution, the trend toward enhanced productivity is evident.

In the AEA’s American Economic Review May 1990 issue entitled U.S. Economic Growth since 1870: One Big Wave, the author Robert J. Gordon of Northwestern University stated, “I believe that the inventions of the late 19th century and early 20th century were more fundamental creators of productivity than the electronic/internet era of today.” Therefore, he was probably correct 20 years ago. In his summary however he stated that, “The exercises summarized in this paper place more of the peak of MFP (multi-factor productivity) growth during 1950-1972 and less during 1913-1950; yet the underlying question remains intact: why did the fundamental determinants of American economic growth create such a surge between 1913 and 1972, but neither before nor after? I deeply believe that this was a unique event that will not be replicated in the lifetimes of our generation or that which follows us, and I hope the challenge of proving me wrong stimulates a new era of growth research.” Clearly, Mr. Gordon recognized the pronounced slowdown of productivity and economic growth following 1972 but referred to the ‘wave’ as a surge of output between 1913 and 1972. His deep belief of a lack of replication of this ‘wave’ for the future will probably be circumvented by robotics. His recognition of the late 20th century ‘internet of things’ lack of enhancement to productivity was probably correct. At that stage, technological advancements were more of data distribution as opposed to the now application of automation in the production process. Currently, however, we are experiencing a new ‘wave’ of robots in manufacturing and services that are starting to show rapid productivity growth.