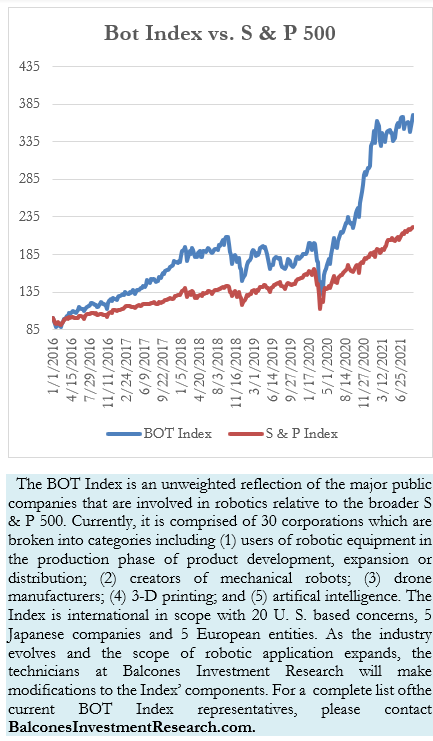 Despite all the political drama and the massively weaker than expected jobs data report last week, the Bot Index enjoyed a robust increase of 2.21%. That number eclipsed the S & P 500’s 58 basis point gain. Interestingly the bot’s performance was almost entirely due to the surge in Japanese holdings. The announcement that Prime Minister Yoshihide Suga would be resigning on September 30, caused the Nikkei 225 to increase almost 5% last week. Consequently, three of the Bot Index’s Japanese components experienced double-digit gains for the week.

The sole domestic outperformer was 3D Systems who has been one of the more volatile performers within the Index. The stock was promoted in a recent article regarding 3D printing and the company’s announcement that it has added three new metals to its list of available construction materials. The stock rose 6.6% which follows the prior week’s gain of 7.53%.

The Chinese EV company – NIO shook off bad news regarding potential moves by China’s Administration to clamp down on income inequality and jumped a bit over 6%. The company reported that it had experienced its highest ever new order flow in August.

There were only four weaker performers within the Index during the period. Accuray Inc. retreated nearly 3%, giving back some of the 10% gains it had experienced over the past few weeks. Lincoln Electric fell 2.84% on Wednesday as it was subject to a heavy volume sell off. Raytheon Technologies declined just over 2% when it announced it would be making an agreement to acquire a privately held, flight-tracking data provider for an undisclosed sum. 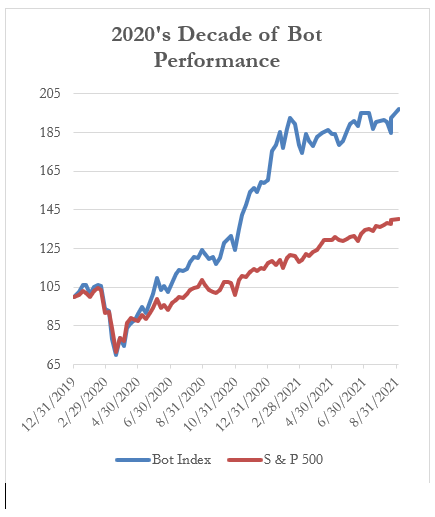 The Future of Surgery?

We recently reviewed a video produced by Interesting Engineering that touted eight robotic surgical systems. Two of the eight are components of the Bot Index: Intuitive Surgical and its DaVinci System and Accuray Inc.’s Cyberknife. Below is a thumbnail description of the devices and their functions:

DaVinci Systems has been utilized in over 5 million robotically assisted surgeries, ISRG is the granddaddy of robotic surgery. It employs minimally invasive arms to respond to the surgeon’s movements via a console.

Yomi Robotic System is utilized in the planning and placement of dental implants.

Cyberknife is the Accuray Inc. brand of specific delivery of radiation treatment that utilizes a 6-axis robotic arm that bends around the patient.

Think Surgeries, like the Mako system, is utilized in partial or complete knee replacements.