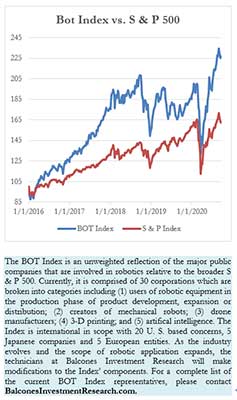 Following two consecutive down weeks, the Bot Index eked out a gain of 85 basis points in mid-month trading. The small gain, however,  exceeded the 64-basis point decline recorded by the S & P 500. Unlike the prior two weeks outperformance of the broader market, the Bot Index did not have to rely upon the Asian components to post superior results. In fact, two different domestic names each provided double digit returns without depending upon an earnings report.

The best performance for the week was recorded by Tesla. Their 18.63% gain was attributed to the excitement associated with Tesla’s annual ‘battery day’. Investors expected the company to announce new, faster, cheaper, and more environmentally friendly production of batteries. Even more significant was the prospect of the long sought ‘million’ mile battery which would vastly impact the entire EV industry. One analyst, during the week, posted an expected target for the stock at $515, a gain of another 16% over Friday’s closing price. 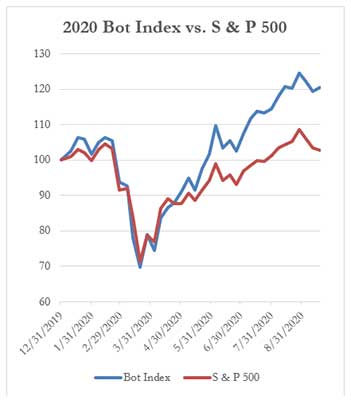 The weakness in the technology stocks has been attributed to many of the ‘majors’ in the NASDAQ sector. Specifically, Amazon fell 5.18%, Google declined 4% (both of which have fallen three consecutive weeks) and Intuitive Surgical slid 6.69%.

So Few Robots, So Few Productivity Gains:
According to a mid-week report by CNBC, industrial robots are not widely used by corporations and even the biggest users are not altogether pleased with their results. The exposé noted that robots are used only by 1.3% of U.S. firms. The feature, entitled “Why Amazon Warehouses and Tesla Auto Plants Will Not Go 100% Robot Any Time Soon.” was based upon research conducted by MIT’s Sloan Management Review. The authors of the piece wrote, “Most companies which invest in automation on a grand scale are likely to see their efforts fail, while those that succeed will be atypical.” In the piece it was stressed the lack of flexibility was the principle cause of behind firm’s lack of participation in the Robotic Revolution. While this might have been be true a few years ago (the research included tweets by Elon Musk in 2018 and data from the 1980’s by GM!), changes in the industry are rapidly expanding into a massive variety of capabilities that will be required by companies that wish to develop faster, more reliable and precise production techniques. Moreover, the research centered on industrial applications and completely ignored medical, communication, transportation, and other industries. If, however, the use of robotics is only utilized by 1.3% of corporations, perhaps that is why, manufacturing sector productivity decreased 14.6% annual rate, in the second quarter of 2020 while unit labor costs increased 29.1%. If this trend continues, perhaps more manufacturers will be induced into greater robotic implementation.