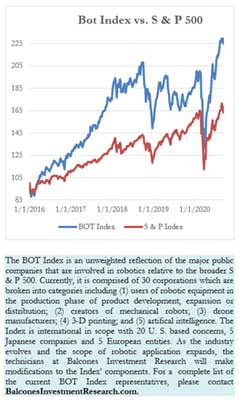 Once again, the precipitous decline of the Bot Index was mitigated by its holdings of Asian stocks, thus allowing it to outperform the S & P 500. The bots fell 2.28%, paced by the decline of the tech sector in last week’s trading. Its holdings of Keyence Corp, Fanuc Inc., Hiwin Technologies, Yaskawa Electric and Cyberdyne Inc., however, permitted the Bot Index to beat the 2.51% decline of the S & P 500. In fact, two of the Asian holdings – Cyberdyne and Fanuc each posted returns of 14% and 8.28% respectively during the week to lead the Bot Index. The only domestic name that positively contributed to the Index was iRobot. The company rose 7.86% based upon expectations of the broadening of its software and perceptions of coronavirus-led homebound customers seeking improvements in domestic electronics. Its low PEG ratio (2.1x), when compared to the industry average of 3.14x, added to the undervalued appeal to stockholders.

On the negative side, the Index held eight companies whose declines exceeded 5%. Leading those were shares of Oceaneering International which fell 25% during the week without much news nor significant increase in shares traded. Also, in double digit declining territory was Tesla whose fortunes turned when investors learned that the company would not be included in the S & P 500. A leading analyst also proclaimed that the company had potentially boosted earnings by sales of regulatory credits.

AeroVironment fell 11.02%, marking four straight weeks of declines. The company reported earnings of $.44 versus expectations of only $.41, but below the year over year quarter that produced $.74 per share. With a P/E of 45x, investors are certainly expecting an improving earnings picture.

Apple made headlines during the week as the leader of the tech sell-off. In looking at lackadaisical earnings and revenue growth, investors felt the 34x multiple was not justified. With a look back at 2018, the company has made little progress in revenues and net income is actually below 2020’s comparable quarter. The trajectory of earnings just is not sufficient to support that valuation. 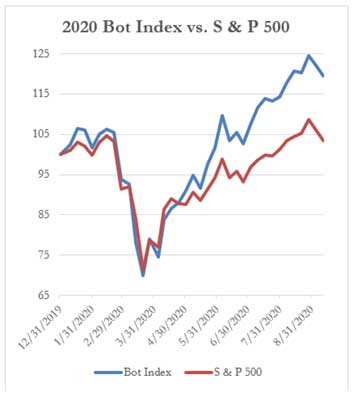 After having spent $31 billion on the acquisition of Cambridge, England based Artificial Intelligence unit Arm in 2016, SoftBank has agreed to sell the firm to NVIDIA Corp. for $40 billion. The acquisition will provide NVIDIA entry into the smart phone chip business, expand its customer base by a factor of 7x and, together, the companies plan on constructing a new supercomputer for AI research.

While the deal is expected to be accretive to NVIDIA’s bottom line, it also carries the ability to open new markets even with some of its toughest competitors. To pay for the acquisition, NVIDIA will issue 44.3 million in new shares as well as $12 billion in cash.