There is no force on earth more powerful than an idea whose time has come."      Victor Hugo 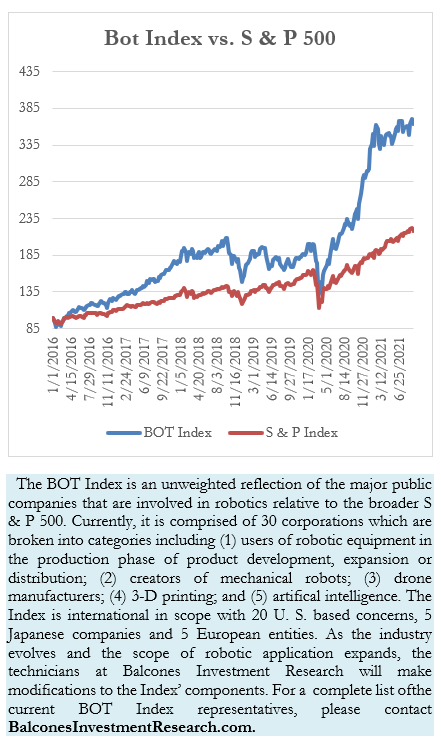 With twenty three of the thirty total components of the Bot Index in the red in last week’s Labor Day shortened trading, it is fortunate that the Index only fell 1.84%. Again, it was the Asian stocks that tempered the loss of the index as the Japanese components continued their two-week surge following the resignation of Prime Minister Yoshihide Suga.

Keyence Corp. gained 4.69%, Cyberdyne rose 5.70% and the Taiwanese company Hiwin Technologies gained 2.42%.  Interestingly, however, it was a domestic name that experienced the greatest percentage move during the week. Brooks Automation’s 7.31% gain was attributed to a Wall Street firm, that indicated the shares have “recently overtaken the 50-day moving average, and this suggests a short-term bullish trend. The 50-day simple moving average, which is one of three major moving averages, is widely used by traders and analysts to establish support and resistance levels for a range of securities.” Indeed, the stock seems to be on an uptrend that started on the 20th of August when the stock was trading at $78.39. This week’s closing value at $91.91 represents a 17.25% move. NIO Ltd. was among the decliners with a near 6% downshift as the company announced a surprise $2 billion stock offering together with reporting that its Hong Kong stock listing was being delayed. The offering would serve to dilute earnings per share and left investors wondering why the incremental capital was needed.

Three lower priced stocks also joined the weaker members of the Bot Index. Immersion Corp., Accuray Inc., and Oceaneering International fell 5.48%, 7.34% and 4.68% respectively with no major news to account for their declines. The near 10% drop by AeroVironment, however, was based upon poor earnings reported for the first fiscal quarter. The company’s seventeen cent loss compared with a $.44 gain in the comparable quarter. This decline was in spite of a 16% increase in total revenues for the period. Again, shareholders were concerned over the incongruent revenue strength versus weak earnings. A major institutional holder dumped 1.3 million shares of Intuitive Surgical on Friday, driving the stock down 4.51%. Traditionally trading in the 300k daily volume, the unnamed institution evidently worried that the delta strain of covid would reduce the number of elective surgeries. With the stock trading at 76 times earnings and no dividend support, the company clearly has become a target as we approach third quarter housekeeping. 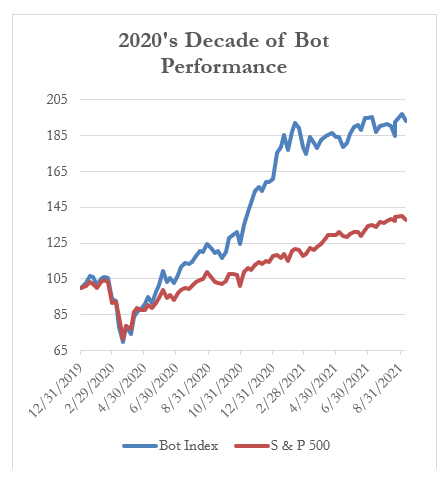 World Robotic Conference:
Beijing hosted its annual world robotic display this week and hosted over 110 companies involved in various aspects of the AI and robotic fields. While there were the traditional industrial application robots, there were an unseemly large number of duplicative robots of natural subjects. Included in more than 500 robots were clones of a large shark, a Koi fish, a walking robot with an interactive screen on its chest to assist in childhood learning, a piano playing robot, a chess player, a sterilizer, one robot conducts mock laparoscopic surgery and a walking, talking replica of Albert Einstein. While the array of robots was impressive, there was not what would be classified as a ‘breakthrough’ technological development. That is not to be disparaged since the Robotic Revolution is making strides daily to enhance human labor, entertainment, safety, and health. The Beijing conference is an opportunity to have the public interact with what the future holds in store for all mankind.

Member: American Economic Association, Society of Professional Journalists, United States Press Association. Institute of Chartered Financial Analysts, Robotic Industries Association, Member IEEE. The Bot Brief is a weekly newsletter designed for economists, investment specialists, journalists, and academicians. It receives no remuneration from any companies that may from time to time be featured in the brief and its commentaries, analysis, opinions, and research represent the subjective views of Balcones Investment Research, LLC. Due to the complex and rapidly changing nature of the subject matter, the company makes no assurances as to the absolute accuracy of material presented.