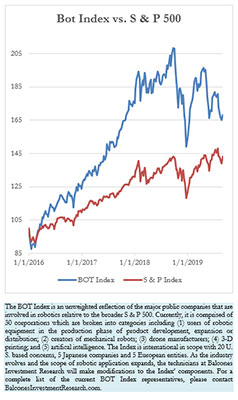 In the strongest week since June, the Bot Index rose 1.67%, breaking a string of four consecutive negative performances. The S & P 500 gained 2.787%, surprisingly beating the bots with their higher betas and the NASDAQ (whose results were slightly below that of the bots). Part of the rationale behind the lesser performance was considerable weakness in lower priced bot issues including Ekso Bionics, NIO Inc., and Immersion Technologies. For seven consecutive weeks, Ekso Bionics has declined and last week’s 13.16% reduction brought the stock to one half its price of the July 12th value. Immersion Technologies backed off 3.64% after being one of the prior week’s better performers, having then gained 7.44%. Finally, despite the China/U.S. trade catalyst that drove the market’s resurgence during the week, unexpectedly, shares of NIO Inc. declined 2.06%.

There were six components of the Bot Index that rose more than 4%. United Technology’s 5.53% boost was a result of the Defense Department’s endorsement of the company’s merger with Raytheon. Intuitive Surgical  rose 5.52% following a Motley Fool research article entitled, “My 3 Top Healthcare Stocks for Long Term Investors”, which included Intuitive Surgical. Two Asian names, Yaskawa Electric and Keyence, increased 4.70% and 5.21% respectively as a result of the easing of trade tensions. Cognex Corp. jumped 4.26% after a Simply Wall Street feature that noted the company’s consistent earnings performance. Finally, Textron fought off numerous class action lawsuits and gained 4.48%. The company announced and demonstrated its latest version of Bell’s autonomous drone. The product, noted as a bellwether for the firm, can carry a payload of 70 pounds and at speeds of 100 mph. Witnessing the successful test was potential buyer Yamato who has other relationships with the Texas concern. The current version has widespread delivery capabilities and defense potential. The long-term prospects are as a major player in the evolution of human transport.

Lanco Integrated to Exibit at the K Show

The Value of an Agile and Collaborative Design Process

Max Zverkov, ABAGY: “To solve the shortage of welders, robots must be adaptive”