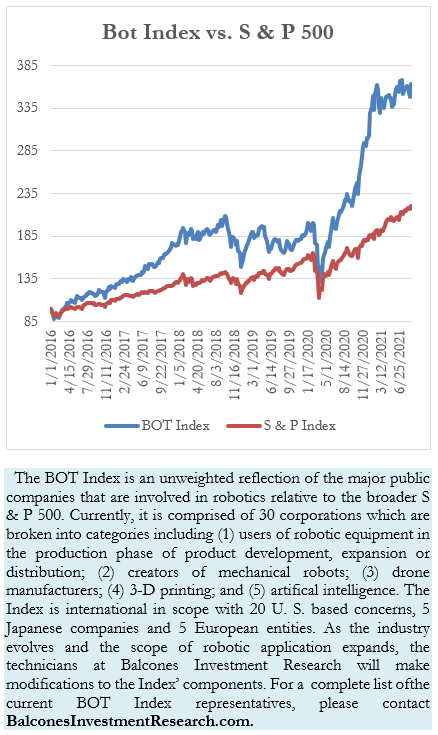 In a dramatic turnaround over the past few weeks, the Bot Index posted a significant gain in trading last week. The bots jumped 4.19%, eclipsing the 1.52% upswing by the broader market as reflected by the S & P 500. While there was only one double digit gainer within the composite there was, likewise, only one stock that declined. The gainers were widespread, with seven stocks whose gains exceeded five percent. Paced by rising oil prices, the shares of Oceaneering International broke a string of four consecutive down weeks to lead the Bot Index. The low-priced company rose 15.10%.

NVIDIA Corp. rose 8.74% as optimism on regulatory approval for the company’s ARM acquisition seemed imminent. The company also was recipient of the U.S. Department of Energy Argonne’s National Laboratory’s new supercomputer. Nvidia confirmed that its graphics card would power supercomputer Polaris. The supercomputer will employ 2,240 of the company’s A100 Tensor Core GPUs.

The biggest loser from two weeks ago, Hiwin Technology, bounced back by 8.19%. Likewise, Brooks Automation’s 8.05% gain was a recovery from the 5.17% decline of the prior week and four consecutive weeks of declines.

Also bouncing from recent disappointments, Immersion Corp. rose just under 8% and Faro Technologies ricocheted 6.35%. Another weaker company within the Index was Accuray Inc. The stock jumped last week 5.44% following the announcement that a Board insider had made a significant purchase of the stock.

As mentioned, the 30-stock composite held only one decliner. Intuitive Surgical slid seventy basis points. Its sole decline prevented the Index from having its only ‘all components in positive territory’ showing over the past five years. 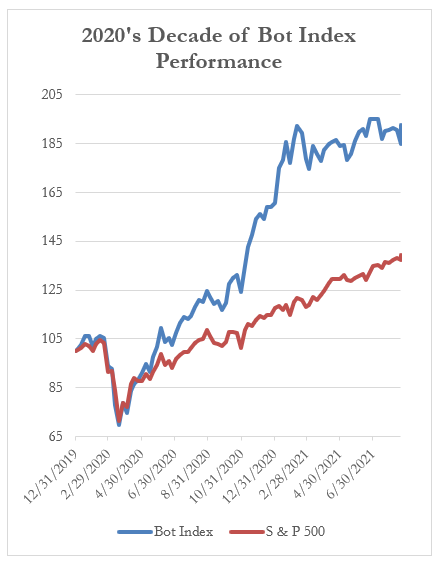 As noted in the prior discussion, NVIDIA Corp. is a major supplier of semiconductor chips for the Department of Energy’s new supercomputer. In a report from the DOE, they noted, “It is not just hardware that defines American leadership. U.S. leadership also depends critically on major ongoing efforts in key fields of research, including applied mathematics and computer science, advanced lithography, and nanoscale materials science – areas where DOE Office of Science research programs excel.” The use of NVIDIA new chips will assist the DOE’s goal of processing at a quadrillion, or a billion-billion calculations per second.

Applications within the national defense, advanced manufacturing techniques and rapid prototyping are a result of this major jump in scientific and engineering progress.