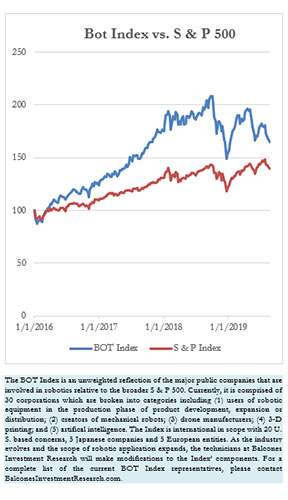 Hopes for a decent performance week were dashed on Friday as the market reacted to the Administration’s imposition of another series of tariffs on Chinese products. The market had improved on earlier in the week on the higher faith for some resolve of the escalation of trade disputes. That optimism was dashed on Friday with the announcement of an incremental set of tariffs by both nations. President Trump has become embolden as a result of the heavy Chinese level of debt (300% of GDP) and slowing economy. Investors, however, have become less than confident on the success of this brinksmanship gambit. The market slid 1.44% and the Bot Index fell 1.16% marking four consecutive weekly declines.

The weaker performers included the low-priced issues of Ekso Bionics and Accuray Inc. Ekso has fallen well below the $1 mark and has tumbled to one-third of its May 5th price. Accuray’s drop of 7.77% came on the heels of its 20% decline during the prior week as its 4th quarter earnings loss and weak 2020 guidance disappointed investors.

There were only a couple of significant contributors to shareholder value during the week. Immersion Tech. gained 7.44% on the announcement that it had entered into a haptic licensing agreement with the Chinese firm Awinic. Specifically, Immersion will provide its technology to Awinic mobile phones. Oceaneering International rose almost 4% on its announcement of reaching $1.8 million in free cash flow versus a negative position last year.