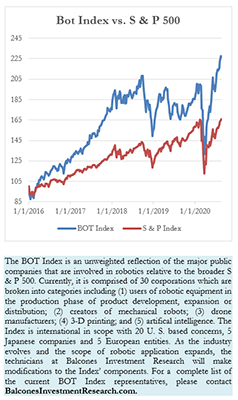 The four straight weeks of positive performance from the S & P 500 was not, unfortunately, matched by the Bot Index who had a minor retraction this week. The broad market gained nearly three-quarters of a percent while the bots dropped less that a half percentage point. Some good economic news on housing and improving statistics on the virus situation gave investors something about which to be cheerful.

The gainers in the Bot Index were led by the amazing 24.19% jump in Tesla stock. Buoyed by its entrance into the S & P 500 together with its announced split, drove the stock to near $2050. This week’s return marked back to back double digit increases in the stock.

Tesla wasn’t the only stock who rallied with an  announcement that the shares were going to be split. Apple rose 8.23% following its report that it, too, would be splitting on the same day (August 31st) as Tesla. While stock splits mean little that would create any financial improvement in the companies, the access to more individual investors would be a positive.

Both NVIDIA Corp. and iRobot stock prices continued to feel the effects of good earnings reports for the second quarter. NVIDIA rose almost 10% while iRobot gained 6.46%.

NIO Corp. rose 7.78%, somewhat in sympathy with Tesla but primarily due to an innovative ‘battery leasing service’. The unique concept separates the car from the battery, thus reducing the price of the vehicle while allowing more flexibility on the battery platform.

The two weakest bot issues for the week were Oceaneering International and 3D Systems. Both companies have had weak stock and financial performance for the past year or so and are trading in single digits. OII fell 17.30% while DDD eroded another 8.56%.

Teledyne slipped 6.74% as recent management earnings guidance is in the lower ranges of analysts’ estimates.

Faro Technologies stock fell 6.61% after announcing it had acquired a Swedish 3D printing company. With the recent lack of success by 3D Systems, it is no wonder that Faro’s investors were not happy with the acquisition.

Other notable losers for the week included Brooks Automation, down 7.27%, Raytheon Technologies, off 5.30% and Accuray Inc. whose shares fell 5.10%. 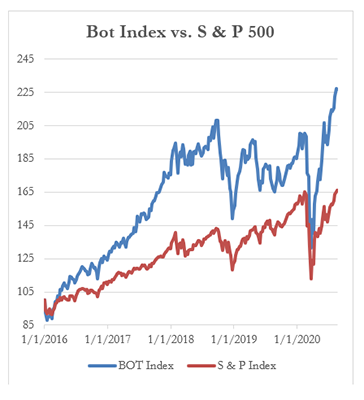 It may seem that Hollywood has either an inside track with the military or the JPL or NASA since they seem to produce movies regarding subjects later appearing as defense or exploration equipment. Think back about the Buck Rogers flights to the moon (and the current eerily reminiscent spider legs of SpaceX’s returning boosters), the movie entitled The Martian that hit the box office a few years ago preceding Perseverance and Ingenuity’s recent launch to Mars. Now, the Army and Texas A &M University are working on shape shifting materials that compare with the evil robot in Terminator 2. According to the Army’s website, “The epoxy material is expected to have the ability for massive reconfiguration and have embedded intelligence allowing it to autonomously adapt to its environment without any external control,” From a military point of view, the ability for drones to change shape in midflight might have an adaptability for increased maneuverability, speed and damage control. From a commercial viewpoint the materials offer significant advantages over limb, tissue, and organ replacements. Damaged human body parts could, ultimately be saying (as did Arnold), “I’ll Be Back!”