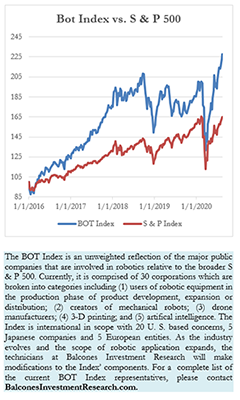 The robotic stocks that comprise the Bot Index continue to perform well in the 2020 environment. This week’s gain of 2.34% pushed the  composite to a new high level of 227.50. When compared to the broad market, the bots have gained 38% more over the period starting December 31, 2015. For the year to date period, the Bot Index has returned a bit over 20% versus the S & P 500’s 4 ½% upturn.

Helping to contribute to the strong performance of the bots this week was the upsurge of a number of the Japanese holdings.

Keyence Corp. led the Asian names with an 8.74% rise, followed closely by Yaskawa Electric who jumped 7.13%. OMRON and Fanuc added returns of 5.43% and 4.63% respectively.

Tesla wracked up the largest gain for the week with its jump of 13.63%. The stock was assisted by a Merrill Lynch report citing a possible 50% annual growth target over the next five years. The company upped their price target from $800 to $1750 and their recommendation from ‘sell’ to ‘hold’.

One of last week’s best performer, Immersion Corp. added another 9% increase over the 17.50% gain of the prior week.

Gainers over 3% included NVIDIA Corp., Raytheon Technologies, Northrup Grumman, Apple, Rockwell Automation and last but far from least was Oceaneering International. The 3.41% gain from OII this week quietly puts this ‘stealth’ stock with a greater than doubling in price since April 4, 2020. The earnings miss by 3D Systems continues to plague the stock, which experienced a 4% decline to lead the weakest of the Bot Index’s holdings. The five other decliners were somewhat inconsequential.