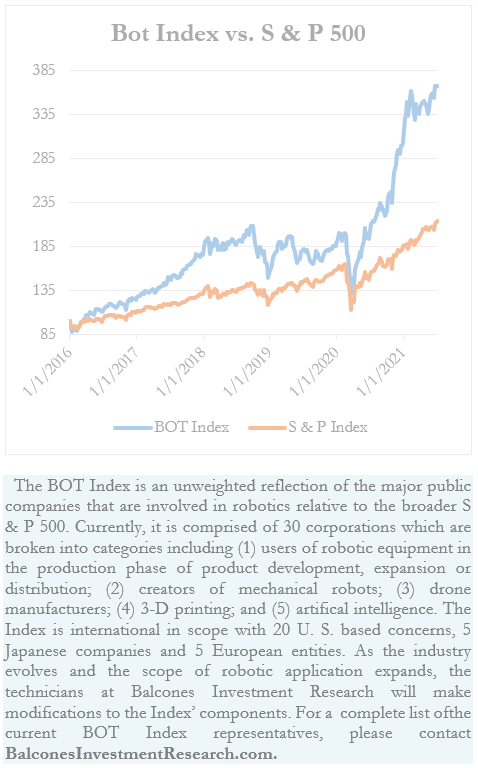 There was little to no gain in financial progress for either the broad market or the Bot Index. The S & P 500 increased 39 basis points while the bots gained a mere 7 basis points for the week. In reviewing the dispersion of performance, the components of the Bot Index had five stocks that gained more than 3% and five that declined greater than that target.

The winners were led by Yasakawa Electric that gained 6.13% on little news. Amazon was in second place in the performance derby, riding the coattails of new CEO Andy Jassy. The stock gained almost 6% as analysts are confident in the future of the succession plan.

The Swiss firm ABB Ltd. rose 4.23% after indicating it was considering a public listing spinoff of its e-mobility division. The division produces fast charging stations for electric vehicles and the IPO was anticipated to raise $3 billion in capital.

Of the weaker issues, the worst performer was the Chinese EV maker NIO Ltd. The company’s near 10% drop was a byproduct of the Chinese government’s reaction to DiDi’s IPO in the U.S. The crackdown on the Chinese ride share company took a nasty turn when the government’s cyberspace regulators began to impose tighter restrictions on data collection and data storage of international listed companies headquartered in China. Authorities have also instituted a more broadly pushing for companies to list domestically. 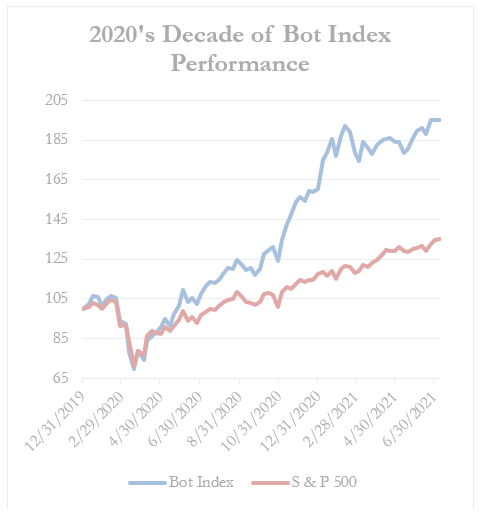 Our friend Marian Tupy featured his Human Progress discussion this month on the little heralded creation of a vaccine to offset the effects of malaria. The transmission of disease by mosquitoes has purportedly killed 52 billion people over time and still accounts for the deaths of 400,000 annually. The new vaccine is designed to ‘kill any parasites that reached the liver or bloodstream, where they cause malaria symptoms. A success rate of 87.5% of the similar parasite has been noted.

While the death rate has been brought down to 400,000, the misery and malfunction of individuals and economic producers reaches 200 million per year. With strides in protecting, preventing, and curing malaria, the economic opportunities of many developing nations will allow their prosperity to flourish.