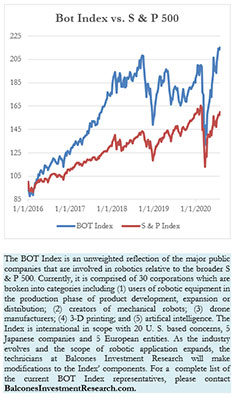 Issues with several Japanese holdings caused the Bot Index to underperform the 1.73% increase that was achieved by the S & P 500 last week. Despite two Japanese companies posting double digit declines for the week, the bots still managed a positive return of .943%. The Bot Index was paced by a sparkling leap of almost 25% by Brooks Automation. Since Brooks was selected to replace Ekso Bionics (due to trading below $.25), the stock has been on a significant run. In mid-May, when the substitution occurred, shares of BRKS have risen from $37.54 to $54.45. This week’s surge was a result of the company’s earnings report which came in at $.36, a 38 ½% year over year increase. The consensus of Wall Street’s expectations was for the quarter to come in at $.20. This quarter marks four straight quarters where the company exceeded analysts’ outlook.

Both Apple and Amazon were among the bot leaders as fears of some form of legislative backlash might accompany their testimonies on Capital Hill were cast asunder. Apple rose 14.73% and Amazon gained 5.18% for the week.

Faro Technologies rose 7.36% as investors have been contemplating an earnings surprise when the company reports on Tuesday. 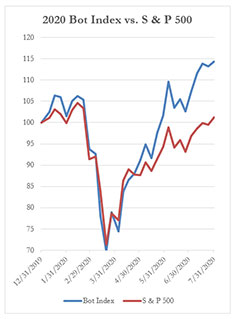 Finally, Cognex gained 4.13% due to earnings and revenue that exceeded expectations. While below the previous year’s numbers, Cognex demonstrated cost cutting measures to support a weaker environment for machine vision corporations.

On the weaker end of the Bot Index, were the three Japanese companies that pushed down the index. Yaskawa Electric fell 5.83%, Fanuc Corp. declined 12.10% and Cyberdyne dropped 15.02%.

Three other firms reporting disappointing earnings were Raytheon Technologies, Rockwell Automation and Oceaneering International and were penalized by 8.68%, 3.56% and 5% respectively.

Where Oh Where Are The Little Green Men?

The excitement regarding space exploration continued this week with the launch of NASA’s robotic rover – Perseverance and its companion drone – Ingenuity. Together, the two will be making a giant leap forward in the search for alien life on the planet Mars. Due to arrive in the red planet on February 18th, 2021, the rover will land in the Jezero Crater to search for prehistoric life. The ‘crater’ is probably a misnomer as scientists are convinced this is the bed of an ancient lake complete with a delta which would be conducive for life support. The rover will be autonomous and can travel between three and twelve miles as it drills into the core or scoops up samples of potential biotic presence. One of its major experiments will be the creation of oxygen from the Martian atmosphere which is 95% CO2. This is viewed as essential for future manned exploration as sufficient oxygen could not be carried efficiently from Earth. In concert with the robotic rover, the venture will carry an experimental aircraft. Since the Martian atmosphere consists of only 1% of the density of Earth’s the wing support of traditional aircraft is unlikely. The four-pound drone copter is made of carbon fiber with two rotors spinning at 2400 rpms. Since the night temperatures can fall to negative 130 degrees, the drone must have a system to keep itself warm enough to conduct up to four test flights. The helicopter carries no scientific material and is solely to test aero transportation in such  weak atmospheric conditions.

The pace of space exploration and exploitation is accelerating as NASA, SpaceX and new private entrants are racing to find new avenues for commercial and scientific ventures. Certainly, the use of robotic devices and artificial intelligence will be essential in these quests and open more opportunities for increases in the human condition.