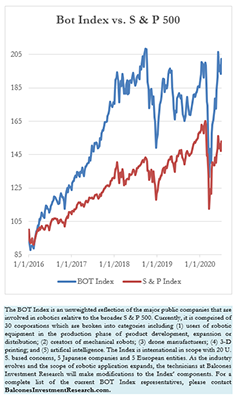 The Bot Index surged 7.33% during the Fourth of July shortened week and again exceeded the 4.02% increase of the S & P 500’s. In reviewing the graph of relative performance between the two indexes year to date, it is of significance to note the differential of almost ten percentage points in the tenuous six months of 2020.

During the week, the two electric car companies experienced explosive investor interest. The Chinese company NIO Ltd. continued its mid-May run from $3.27 to the current $9.28 and this week’s 35.94% increase to lead all the components of the Bot Index. Likewise, Tesla blasted through the $1000 per share mark to close at $1,208.66 for a 26% weekly jump.

Three other components gained in excess of 7%. They included the Swiss firm ABB Ltd., Google, and Amazon.

Three firms had negative returns during the week. The Japanese concern Keyence Corp. fell 3.24%, while both the low-priced Immersion Corp. fell 2.64% and Accuray Inc. slid 1.36%. 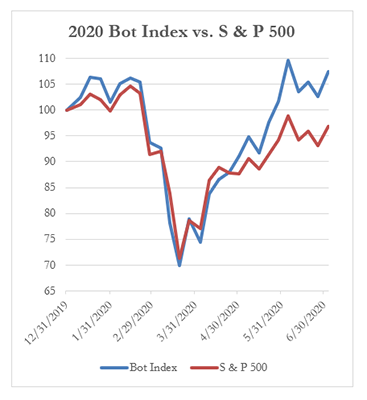 It Has Become Apparent:

In reviewing the returns of the long-term Bot Index versus the broader market, it is evident that the 30 robotic companies have significantly outperformed the broader market. Likewise, over the shorter period (and one of marked investor angst) of the first six months of 2020, the bots have continued to widen the gap between their performance and that of the S & P 500. So, what can we infer by this rather dramatic and consistent trend toward those companies that are robot producers or employers of drone and automated solutions?

First, let us go back to the reason we created the Bot Index in the first place. Balcones Investment Research was contacted by the Chartered Financial Institute to run a story regarding how robots were likely to impact Wall Street. The resulting article became the cover story for the CFA Digest’s  September 1995 issue. In researching for the article, we became interested in pursuing what investment opportunities the robotic revolution would present. Since we had created various regional indexes for such busines journals as Crain’s Chicago, Crain’s Detroit, and Crain’s New York as well as newspapers including the Boston Globe, Patriot Ledger, Miami Herald, San Jose Mercury News, we determined an unbiased index might provide the most accurate and appropriate appraisal of robotic opportunities for investment.

The selection of companies that would comprise the Index was not as easy as one might presume. Many of the real breakthroughs in robotic, AI and automation technologies were achieved and conducted by universities or private organizations. Their lack of transparency and success tracking certainly made them inappropriate candidates for a measurement of the robotic world’s economic impact. In addition, we felt that there must be a significant international exposure within the Index, so we devoted one-third of the components to those public companies that were domiciled outside the United States.

Finally, and most importantly, we took a page from the rationale behind the U.S.’s electoral college, making each State equally represented. By having the percentage movement of each of the Bot Index’s thirty components equally weighted, the Index’s movements would not be skewed by market capitalization or stock price. Our sole intent was to present a factual accounting for the impact that robotics is playing on the investment world. The Index was not created with an intent to outperform or be biased in any way. We just wanted a reflection of how well those companies involved in the production or utilization of robotics perform versus a broader market counterpart. Stock price movement presents the ultimate reflection of economic success.

Clearly, the results are showing the robotic revolution has both logic and legs. The logic might become even more apparent as the Covid-19 pandemic exposes the vast opportunities presented by automated delivery systems, efficiencies in the production cycle and continuity of the supply chain. Since we are still in the infancy of the creation and application of robots in the workplace, it is inevitable that the companies involved in the production or utilization of robotics will provide investment opportunities for decades in the future. The legs of these revolutionary new investment prospects are likely to curry investor interest for many years in the future.