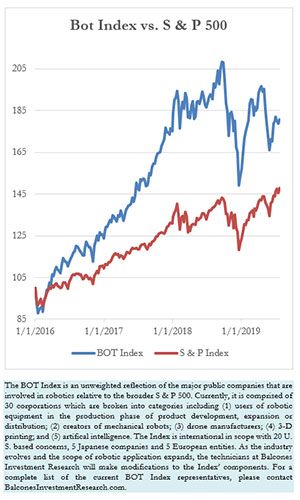 With the domestic markets hitting all time high levels this week, the Bot Index has been lagging, however, managed to gain a bit over a percentage point. The bots trailed the 1.65% rise in the S & P 500 primarily due to the impact of double-digit declines in two of the Index’s components – iRobot and Oceaneering International. iRobot’s crash came as a result of management’s lowering its full-year outlook  for revenue of $1.2 billion to $1.25 billion, or growth of 10% to 14% (down from 17% to 20% previously), and for earnings per share of $2.40 to $3.15 (down from $3.15 to $3.40 before). Consequently, the stock declined 19.3% on Wednesday before a brief rally that carried the stock up on Friday. The company cited tariffs and Chinese economic weakness as rationale for the earnings weakness. The ten percent drop in Oceaneering International was also earnings driven as EPS declined 32 cents and revenues were below analysts’ consensus. The stock has been on a four week decline since achieving a $20.39 price in late June to close out the week at $16.08. Three international holdings further exacerbated the return of the Index. Keyence Corp. fell 4.82% for the week and Cyberdyne Inc. dropped 3.62% and Qiagen N.V. slid 3.16%.

On the positive side of the performance spectrum were two components that rose above 10%. The bots were led by Google, whose 10.65% expansion was a function of the quarterly earnings that, at $14.21 per share, were up 20% year over year and revenues that, likewise grew 19.3%. Faro Technologies’ report of a doubling of earnings over last year’s quarter and a cent above analysts’ expectation drove the shares up 10.29%. Two defense companies who have enjoyed awards during the past year noted good earnings in their reports this week. Northrup Grumman gained 9.42% as its $5.06 earnings per share compared with last year’s $4.50 and above consensus of $4.68. Revenues grew 9.13%. Teledyne reported $2.80, forty cents above expectations and 20% above last year. This quarter marked four consecutive quarters where the company beat Wall Street’s estimates.

Back in September 2015, the Managing Editor of the CFA Institute, Roger Mitchell, included an article that we wrote as the cover for the CFA Digest. The title of the feature was Droidonomics: Robots vs. Investment Management. The New York Post followed up with an expose in early 2016 titled Robotic Trading is Killing Wall Street Jobs, which made the claim that 10 million finance jobs have been lost to robots since 2000. Fast forward to recent times and The Economist’s July 27 issue carried an article, Robo-advisors: Looking After the Pennies. This contemporary commentary made mention of the growth of robo advisors and the acceptance in the marketplace of such non-human investment analysts. Some of the data would support the fact that $179 billion in assets in just the four firms that the article mentioned have accrued into robo-type investment opportunities.

Two new stories have emerged over the past week regarding robo advances in outer space and in undersea exploration. In the June 15th issue of The Economist, the Orbital Ecosystem article features innovations in space satellites. Due to reduced costs associated with the launching of small data-gathering satellites, a plethora of ventures have emerged. Such capabilities as monitoring illegal shipping, universal internet connections, measuring oil storage tanks, banned fishing and even spotting movement of submarines are only available from outer space. The other article involves the efforts of Florida International University and University of South Florida’s use of their fleet of autonomous gliders to map the migration of animals at various depths. The gliders are produced by Teledyne Webb Research Corp. and are designed to monitor the flow of the world’s largest migration and how carbon is transported to deeper waters. With carbon being the basis of life, a greater understanding of how it is distributed could be important in the fisheries industry.

The Future of Robotic Welding in Manufacturing