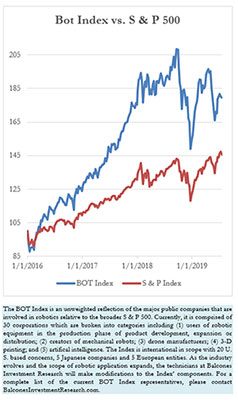 In a sloppy market last week the Bot Index bested the broader markets. The S & P 500 declined 1.23% while the bots fell only .744%. Several of the Bot Index’ components recovered from significant weakness in the prior period. Two Asian companies were among the better performers who were among the biggest losers in the week before. Yaskawa Electric and Keyence Corp. each gained a bit over 3% while Accuray Inc. rose 10.25% after having previously fallen 5.25%.

The weakest stock in the Index was Oceaneering International who experienced a decline of 8.44%. The company was subject to a Zach’s article that indicated the June quarter earnings would likely be down 8.7% over the prior year’s quarter and experience a $.25 loss. Likewise, a bleak earnings report from Textron drove shares down 8.34%. Revenues from the defense and aerospace conglomerate fell some 13.8% and weakness was noted in each operating unit. Earnings per share fared a bit better, however, without significant stock buy-back during the quarter, income would have fallen around 3%. Other weaker components included Ekso Bionics, down 3.17% and Cyberdyne Inc. who fell 3.20%.

“To the Moon, Alice”

It was Ralph Kramden that frequently issued those words in the old TV show, The Honeymooners. However, on the eve of Neil Armstrong’s historic moon landing fifty years ago, Vice President Mike Pence announced that “America (not Alice) will return to the moon”. Within the next five years the Artemis program will seek to establish a ‘sustainable human presence’ on the moon. As the Bot Brief has long noted, the exploration of both undersea and outer space will vastly expand the need for robotic applications as these two human hostile areas are investigated. 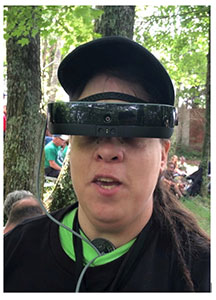 “I Can See Clearly Now, The Rain Is Gone.”

While attending a music concert last week, the Bot Brief noticed a young lady who was awaiting the set by the Celtic rock group Seven Nations. She spent some time adjusting ocular gear that looked somewhat like a virtual reality headset. On further examination, however, it was apparent that the young lady was blind and the device was some form of ocular assist. Bambi Parsons told the Bot Brief that she was born premature and her optic nerves were damaged in the process. Together with a bout with hydrocephalus, Bambi was left visually impaired to the extent that she couldn’t read or, as she told us, unable to see the band even though she has followed them for twenty years. She explained that she heard about the glasses through her work at Asheville, North Carolina’s IFB Solutions (formerly Industries for the Blind). The Canadian company that makes these eSight glasses utilize a set of cameras that make videos using advanced algorithms to optimize an increased reaction to the eye. At a price of $6,000, the company’s product enhances the vision caused by a variety of conditions such as macular degeneration, glaucoma, retinitis pigmentosa, retinal detachment and cataracts. According to Bambi, she could, for the first time in 20 years, see faces, read books, enjoy TV and have an almost normal life. She explained that she has had a ‘crush’ on one of the band members since high school but had never seen him. As the band took the stage she began to weep.