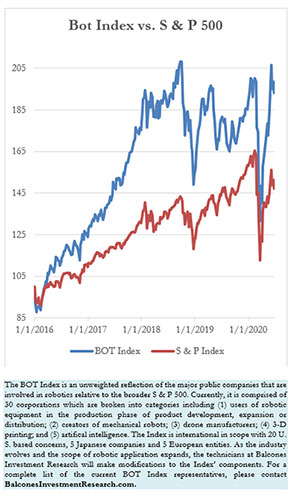 The markets again continued their trading trend of ‘two steps forward and one step back’ this week. The Bot Index barely exceeded the S & P 500’s decline of 2.86% after fears of significant increases in Covid-19 instances. The rising trends of contagion, forced reappraisals of the relaxation of former shelter in place mandates. These retractions led investors to worry about future economic trends if the population returns to either mandated or self-imposed sequestration.

There were only three gainers of particular note during the week. The primary performer for the week was the drone manufacturer AeroVironment. Incidentally, the stock was among the weaker of Bot components, giving up 2.85%. However, the stock bounced back to lead the bots with its 13.95% gain. The stock was pushed by its April quarter end earning and revenue surprises of 8.7% and 10.1% respectively. Revenue production year over year for the quarter rose some 54%, leading to an earnings gain of $16 million over the $5.1 million from the comparable period.

Cognex Corp. shares traded 3.15% higher as the company’s earnings picture has prompted analysts to increase expectations three times in the past couple of months. And, Amazon rose 6.68% as the company jumped into the autonomous car industry last week with its billion dollar takeover of Zoox.

There were quite a few stocks in the index that retreated more than 5%. The weakest performer for the week was 3D Systems who was the only double digit decliner with its 12% slippage. The stock has been under pressure as 13F filings have noted significant reductions by major shareholders as institutional interest in the company has wained. Likewise, the same data impacted shares of Oceaneering International to the tune of 9.89% for the week.

Other significant losers for the week included:Raytheon Technologies off 8.92%, Cyberdyne fell 8.86%, Textron down 7.68%, and Teledyne who slid 6.84% 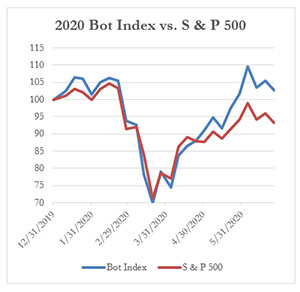 BVLOS and Your Convenience:

Just as Amazon announced its purchase of start-up Zoox in the autonomous car business, a number of major players are looking at autonomous drone delivery systems to assist in the delivery of goods to consumers. Converging technological gains in power and Beyond Visual Line of Sight capabilities have prompted the FAA to consent to more expansive use of drones for un-manned distribution. With some limitations, the FAA has allowed UPS to partner with CVS in the delivery of medications autonomously. The fixed wing UPS Flight Forward drone can carry weights up to 50 pounds. Also, in the mix are Amazon who has long sought drones for the delivery of merchandise and Google (GOOGL), whose autonomous delivery service Wing was the first to get approval in the US as a certified air carrier.

Just as Fred Smith’s vision of daily delivery decades ago led to the founding of Federal Express, the use of the skyways for distribution by non-manned drones is a dream that rapidly becoming reality. 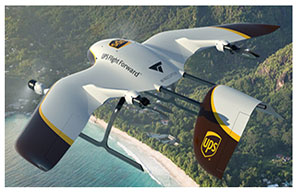 A Step-by-Step Guide to Getting Started with Automation