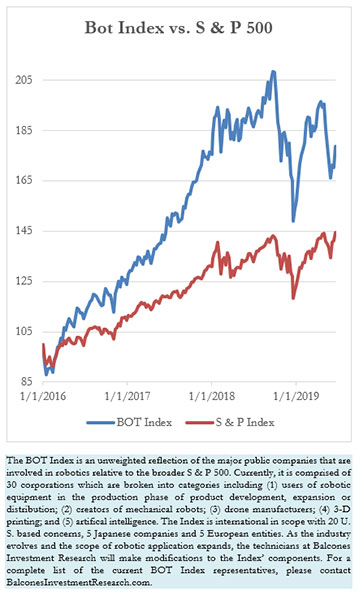 Breaking a string of six straight weeks of underperformance to the broad market, the Bot Index gained 4.87% last week. Ten of the Index’s components rose over 5% and, of the thirty-stock index, only one company, Ekso Bionics, posted a decline. Consequently, the bots totally eclipsed the 2.20% jump in the S & P 500.

Most of the gains in the Bot Index were a result of recoveries by good companies that have underperformed over the past few weeks. Several of the Asian-based components rebounded due to the agreement of the heads of China and America to meet during the G-20 summit. This gave new life to the hope for some resolve of the trade issues that have developed between the two countries. The Asian names were led by NIO Inc. which rose 9.09%. Since the beginning of May, NIO has been on a consistent decline which witnessed a near halving of the low-priced stock. Joining NIO were Hiwin Technologies who jumped 8.64% and Yaskawa Electric that experienced a 6.41% recovery.

Cognex Corporation., ABB Ltd., Faro Technologies and 3D Systems gained 6.25%, 5.63% 9.38% and 11.18% respectively on no real news that would a spawned their strong upswings. This week’s best performing stock, Oceaneering International, however, was stimulated by the announcement that it had be awarded a contract by Anadarko Petroleum Corporation, to supply umbilicals, distribution hardware, and aftermarket services regarding its Mozambique drilling project. The company is expected to deliver over 115 miles of tubing and miscellaneous periphery materials. Starting in the third quarter of 2019, the project is expected to be completed in two years. On the news, Oceaneering International’s stock jumped almost 15%.

Intuitive Surgical’s stock rose 6.18% as an article entitled, “7 S & P 500 Stocks to Buy With Little Debt & Lots of Profit”. The primary focus of the feature was the broadening of ISRG’s product line since the FDA approval of the company’s new Ion system. This product is a catheter-based device which allows non-invasive, precise penetration and sampling of tissues deep within the lungs.

Also last week, Barron’s Magazine reported that a 13D filing in early June revealed that VIEX Capital had taken an additional position in Immersion Corporation. The self-described ‘activist capital manager who seeks to unlock shareholder value’ increased its holding from 6.15% (which it established in March) to 10.3%. This will likely have a positive influence in the company’s prospects in the long term. The stock gained almost 6% for the week.

Finally, the shooting down of the Northrup Grumman drone by the Iranian government in the Gulf of Hormoz last week had no negative impact upon the stock. The stock closed out the week with a 4.11% return for its holders.