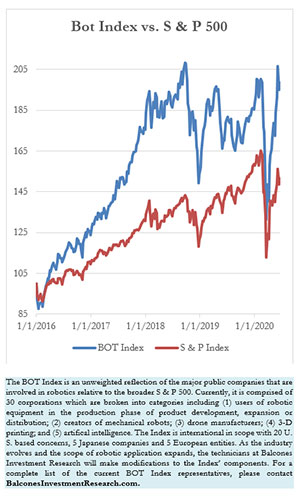 The fact that Apple chose to close a dozen of its stores on Friday caused the entire market to reappraise the impact of rising cases of coronavirus on the economy. While the S & P 500 was up for the week by 1.85%, the number could have been much higher had the market not taken the Apple news more constructively. The half point Friday drop in the S & P was attributed to a comparable drop in the shares of Apple.

The Bot Index gained 1.87% for the week and had seven components that experienced greater than 5% increases, while having only four decliners of any significance.

The Bot gainers were again led by the two electric car manufacturers. Both NIO Ltd. and Tesla were among the best performers last week and the prior week. NIO’s gain of 9% in the first week of June preceded this past week’s 20.33% jump. At $7.34 the stock now exceeds its IPO price set almost two years ago when it joined the New York Stock Exchange. Likewise, Tesla hit a milestone and closed above the $1,000 mark as a result of its 7.02% increase for the week. It was also subject to reports that it was seeking $68 million in tax breaks for building a 5 million square foot production facility on 2100 acres of property near Austin, Texas.

On the announcement that iRobot’s management expects significant improvement in revenues and operation profit in the second quarter, the stock gained 8.24% for the week.

The opening up of the economy in many parts of the world contributed to the 5.22% increase in Intuitive Surgical as hospitals resumed more normal operations. Certainly, the Zach’s article entitled, “Here's Why You Should Hold on to Intuitive Surgical Stock Now” didn’t hurt the stock’s value perception.

The cover of this week’s The Economist stated, “The Genius of Amazon” and went on to note that the company is in the right position at the right time. Certainly, Amazon’s stock has been a big environmental beneficiary, having risen some 40% year to date and 5.12% during the week. 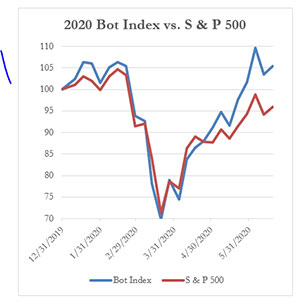 The weaker performers for the week included: Immersion Corp. down 8.43%, Oceaneering International off 4.44%, Faro Technologies retreated 3.72% and AeroVironment gave up 2.85% for the week. None had significant news that would point to their deviation from the overall positive nature of the Bot Index.

A3 to Present at Exporting Event for Small Businesses