As favorable as was the first week of June proved to the Bot Index in both absolute and relative terms, the second week of the month was a disaster. The Index dropped to 194.99 for a 5.54% slide while the S & P 500 faired only marginally better experiencing a 4.78% decline. Interestingly, there were only 5 components that produced a positive return for the week, which matched the five companies that fell into double digit territory.

The two auto manufacturers NIO Ltd. and Tesla were among the better performers for the week. Both were influenced by CNBC’s Jim Cramer’s comments that Covid-19 would likely favor the auto manufacturers due to fears of mass transit and car-pooling. NIO was also the beneficiary of an announced 60 million share offering that was oversubscribed to 72 million. That helped drive the share price up over 9%, and Tesla rose 5.60% to become the most valuable auto firm in the world.

All but one of the five double digit decliners were among the prior week’s best performers. Several of the companies seem to be akin to a yoyo in their gyrations of severe week-by-week upward and downward movements. Accuray Inc. fell 13.77% to lead the weakest performers, however, Textron was down 12.70%, Teledyne fell 11.52%, Oceaneering International retreated 10.73% and 3D Systems declined 10.60% In Case You Missed It:

Somewhat overshadowed by media coverage of Covid-19 and riots, the impact of having a private U.S. organization, place men in space for the first time in decades, is a giant leap forward for mankind. Headquartered in Florida, we had a first-hand look last week at the two astronauts that launched for the space station from their SpaceX Falcon 9 Heavy rocket ship. The feat introduces a new era of space travel opportunities for man and machine. Below is as close as we could get in viewing the launch.

The Bot Brief had always felt that space and ocean explorations are opportunities for robotics to lead the way in new discoveries. Indeed, a lunar rover named VIPER will be seeking ice on the moon’s poles. A private Pittsburgh firm – Astrobotic Technology is the recipient of a $199.5 NASA million contract deliver the robot to the moon in 2021. If lunar ice can be found it will be a major break for future explorations of outer space where the moon could become the launch area. 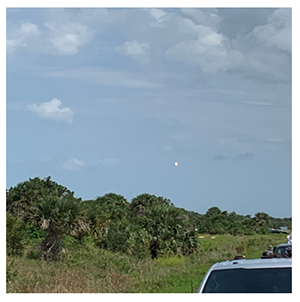 What Challenges Does Automation Solve for Manufacturers?