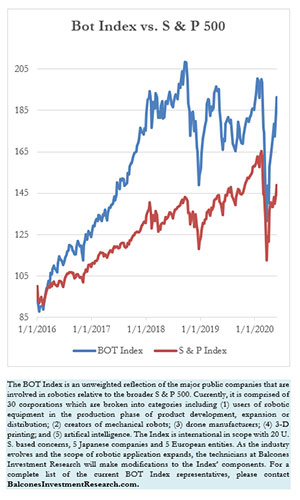 The Bot Index gained 4.13% for the final week of May, besting the S & P 500 by 112 basis points. The increase marked the 7th out of the past eight weeks that bots outperformed the broad marketplace.

Four components of the Bot Index rose by double digits and five others exceeded 5% in their contribution to shareholders. In no particular order they included:

Keyence: Bloomberg reported that the economy in the Coronavirus environment was starting to favor the utilization of robots in the workforce, stating “order books of industry giants like Fanuc Corp., Keyence Corp. and Harmonic Drive Systems Inc. point to businesses wanting to get their operations up and running – increasingly, without humans. Industrial robot exports from Japan, the heartland of automation machinery, grew to some parts of the world from the previous year.” That led to the stock’s near 9% leap.

Textron: An analyst with the Motley Fool reported, “If a recovery is taking hold, I'm optimistic Textron has bottomed out and can slowly creep higher. But even if the macro issues are now in the past there is still not an obvious catalyst in the near term to get Textron rocketing higher.” Still the stock rose 15.09% and follows an 11% increase the prior week.

Rockwell Automation: ROK’s 7% gain this week pushed the stock to its 52-week high. In a report, the company’s management noted the demand for its products “to witness above-market growth through a combination of share gains in core platforms, double-digit growth in Information Solutions and Connected Services segment, and contributions from acquisitions and inorganic investments.”

Aerovironment Inc.: United States Army awarded AeroVironment $146 Million for Lethal Miniature Aerial Missile Systems (LMAMS) contract funded at $76 million. The company’s Quantix Recon drone has a hybrid design that permits it to take off vertically like a helicopter (or a quadcopter), but then fly horizontally like an airplane for as long as 45 minutes per battery charge, surveying an area of 0.6 square miles, or up to 12.4 linear miles, per flight. It is immune to radio interference and jamming due to its pre-programed waypoint guiding.  The stock has noted 5 consecutive weeks of gains that this week’s 8.39% continued the string.

Lockheed: The defense manufacturers performed well this week and Lockheed was no exception. On the heels of a $393.8 million support contract for the F-35  combat jet, the stock rose 5.27%. The contract will have long term earnings implications for Lockheed as the F-35 fighter is expected to continue for many years, given the U.S. government's current inventory target of 2,456 aircraft for the Air Force, Marine Corps and Navy.

Nio Inc.: The Chinese Auto manufacturer  reported Thursday a narrower-than-expected loss and revenue that fell less than forecast. For the second quarter, however, Nio expects to deliver between 9,500 and 10,000 vehicles. Revenue is expected to be between RMB3.37 billion ($475.7 million) and RMB3.53 billion, compared with the FactSet consensus of RMB2.71 billion.

Of the Weaker Performers:

Cognex: The company announced it was laying off workers and cutting its office space. The result would be the recognition of a restructuring charge of $20 million in the second quarter. Unfortunately, the company also noted that it would incur significant costs associated with inventory write-downs and intangible asset impairments.  The impact to the machine vision company was an 8% drop in the stock. 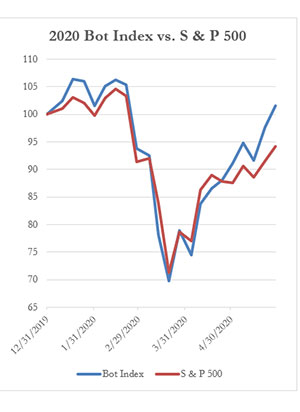 Nose to Nose for Humanity:

In The Economist spinoff 1843 – Stories of an Extraordinary World April & May Issue was a feature entitled Beyond Human – The Sniff Test. Several years ago, the Bot Brief ran an editorial about how robots mimicked most of the human senses except for the sense of smell. The human sense of smell is seldom used in manufacturing, research or exploration so its application to robotics has been negligible. We cited the significant use of smell in the animal world and perhaps we were missing something regarding its incorporation in robots. Since that time, there has been some progress in that direction, however, the applications have not been universal since human smell is invariably linked to taste. In the 1843 article there was an interesting discussion about research being conducted at the University of Pennsylvania using dogs to detect ovarian cancer. The dogs have been trained to use their smelling capabilities to be ‘outstandingly accurate’ in locating cancer growths. The impact is so significant that there is a 90% cure rate if  detected early, however, the survival rate is only 20% if left to later stages. Here is where the dogs come in. They can quickly sniff out the cancer where doctors have no readily available alternative detection capability. The researchers are hard at work developing a device to replicate the dog’s acute olfactory cells. Using an AI algorithm, a test has been cultivated that has been 100% accurate. This could lead to a giant leap for the medical treatment of hard to diagnose cancers. Once again, technology and automation are proving their worth to our very existence.