"There is no force on earth more powerful than  an idea whose time has come."       Victor Hugo 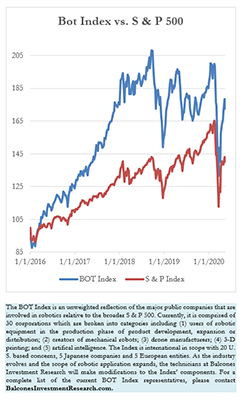 The domestic market experienced a rough week with the S & P 500 declining 2.26%. In many articles, part of the drop in the broad market was attributed to one of the Bot Index’s newest holdings Raytheon Technologies. Raytheon declined 10.12% and was among the five stocks within the bots that fell by double digits. The worst performer was Accuray Inc. whose two- week decline follows a strong 23.42% jump in the week ending May 1. The stock fell 11.57% but whose future fortunes may be expressed more positively in a Thursday released Zachs’ article entitled, “Delivery Bots Making an Impression Amid Coronavirus Pandemic”. The five cent earnings miss by Textron pushed its stock price down by 11.36%. The hiring of a new CEO for 3D Systems contributed to the 10.7% drop in DDD while NIO Ltd. gave back 10.61% from the 28.23% climb over the past two weeks.

The sole gainer of any major significance was NVIDIA Corp. who jumped 8.68%. The move added to the prior week’s double digit increase and led the stock to its all-time record high level. Apparently, investors are expecting good earnings numbers when the company reports on Thursday. In addition, both gamers and stockholders are excited about the announcement of the company’s new Ampere GPU system which led one analyst to designate the product as ‘Unassailable’.

The April 2020 issue of The American Economic Review carried an article entitled, “Are Ideas Getting Harder to Find?” by professors from Stanford and MIT. This interesting feature utilized statistics to establish the authors’ hypothesis that economic growth is a function of research productivity times the number of researchers. This formula sounds much like what we all learned in Economics 202; the intrinsic growth of an economy can be determined by the labor force growth rate plus labor productivity. In this particular article, the authors utilized their formula on Moore’s Law regarding the doubling of transistors in computer chips every two years. They noted that the ‘number of researchers required to double chip density today is more than 18 times larger than the number required in the early 1970’s. A similar conclusion was determined regarding the decline in pharmaceutical innovation per dollar of pharmaceutical research. Their findings on these and other observations was that the flow of new ideas per research dollar has been declining and, using data from 1930, determined that the number of researchers has increased by a factor of 23 while research productivity (measured by TFP growth) has actually declined at a rate of 5.1% annually). In conclusion, the researchers stated that “we find that the evidence presented in this paper concerns the extent to which a constant level of research effort can generate constant exponential growth, either in the economy as a whole or within relatively narrow categories, such as a firm or a seed type or a health condition. We provide consistent evidence that the historical answer to this question is ‘no’… research productivity is declining at a substantial rate in virtually every place we look. Research productivity is falling sharply everywhere. Taking the US aggregate number as representative, research productivity falls in half every 13 years: ideas are getting harder and harder to find. Put differently, just to sustain constant growth in GDP per person, the US must double the amount of research effort every 13 years to offset the increased difficulty of finding new ideas.” 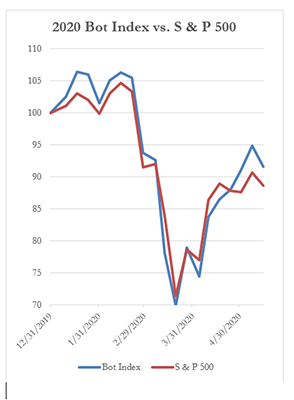 The May 2nd issue of The Economist might echo, but only indirectly so, the concerns of the MIT and Stanford researchers. The feature entitled “The 90% Economy” addressed the economic issues associated with the Covid-19 pandemic. The Economist noted, “If people mix less after lockdowns lift or if they are idle for months on end, they will become detached from professional networks and may lose skills. America’s unemployed could face a lost decade. Government schemes will save businesses in the short term, which is welcome. But those designed to preserve jobs risk eventually creating zombie firms that neither thrive nor go bankrupt, slowing the recycling of labor and capital.” If ever the dearth of ‘ideas’ is likely, it will be with the disruption of the economy by the disruption of stimulus one receives from collaboration with peers.

While the Bot Brief recognizes the relevancy of the above articles, we maintain that the world is on the cusp of a tremendous leap forward into a different environment of artificial intelligence and robotic production. New ‘ideas’ will evolve from different neural banks that have infinite capacities to analyze data, chart conclusions and develop new concepts. The number of researchers and even the amount of dedicated research dollars will be offset by the tremendous power of AI. Productivity will be enhanced in a multitude of ways and the primary beneficiaries will be mankind.

The Bot Brief is a weekly newsletter designed for economists, investment specialists, journalists and academicians. It receives no remuneration from any companies that may from time to time be featured and its commentaries, analysis, opinions and research represent the subjective views of Balcones Investment Research, LLC. Due to the complex and Member: American Economic Association, Society of Professional Journalists, United States Press Association. Institute of Chartered Financial Analysts, Robotic Industries Association, Member IEEE.

Due to the  rapidly changing nature of the subject matter, the company makes no assurances as to the absolute accuracy of material presented.